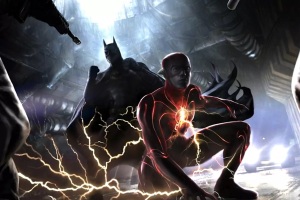 In an alternate timeline, we’re currently in the midst of a robust run of interconnected DC films that’s building towards a Justice League 2, all spearheaded by filmmaker Zack Snyder. But the thing about plans is they can change rapidly, as they did when Batman v. Superman: Dawn of Justice hit theaters back in 2016 to disappointing box office and critical reception. And once Snyder left Justice League in post-production, Warner Bros. pivoted hard towards removing the connective tissue between their DC films. But what’s old is new again, as a new report suggests the studio is going to attempt just that one more time – they intend for their upcoming slate of DC movies to be part of an interconnected universe.

The news comes via THR, in their report on Warner Bros. cancelling two DC projects yesterday: Ava DuVernay’s New Gods movie which would have made Darkseid a main character, and James Wan’s Aquaman spinoff The Trench. The studio said in a statement that these films did not fit in their current schedule for DC projects, but noted that they could be revived down the line. But that certainly begs the question, what’s the plan?

According to THR, DC is “plotting its films and shows to share the same universe,” which includes upcoming projects like Aquaman 2, Black Adam, and Shazam! Fury of the Gods. The one big outlier here is Matt Reeves’ The Batman, which reboots the titular character with Robert Pattinson filling out the role, but THR says this film is set on an alternate Earth known as Earth-2.

Indeed, key to this plan going forward is The Flash, which finally begins production this month under director Andy Muschietti with Ezra Miller reprising the titular role. That movie will introduce the idea of the multiverse – the notion that other versions of Earth exist with different realities. To that end, the film will find Michael Keaton reprising his role as Batman from the Tim Burton movies and Ben Affleck reprising his Batman role from the Snyder films, exemplifying how two different Batmen can exist in two different realities at once.

So going forward, there will be outliers like The Batman and Joker which exist in different realities, and potentially that J.J. Abrams-produced Superman movie that Ta-Nehisi Coates is writing that will introduce audiences to a Black Superman, but films like Aquaman 2 and Black Adam will occupy the same reality and will have stories that are interconnected.

Key to this plan is HBO Max, and Warner Bros. is keen on crafting TV spinoffs for each of their DC films. James Gunn’s The Suicide Squad – which will be part of this interconnected universe when it hits theaters in August – has an HBO Max spinoff called Peacemaker starring John Cena, and even The Batman has an HBO Max spinoff in the works revolving around Gotham P.D.

It’ll be interesting to see if Warner Bros. can nail the interconnected universe idea a second time. Arguably the reason they failed the first time is because they wanted to fast-forward to their own Avengers movie. They saw what Marvel was doing, and instead of methodically building up characters with their own individual films, they followed Man of Steel up with a mini-Avengers movie in Batman v. Superman and rushed straight into a Justice League movie, before audiences were able to build a strong connection to characters like Flash, Aquaman, and Wonder Woman.

But now audiences do have connections to these characters – future installments in the Aquaman and Wonder Woman franchises are highly anticipated, and Dwayne Johnson is making his DC debut with Black Adam which hits theaters next year. Other future DC movies include Batgirl, Supergirl, Blue Beetle, Green Lantern Corps., and Static Shock, so there’s certainly a lot of promise there. Again, the big question is whether they’ll rush too quickly again, but having HBO Max as an outlet for longform storytelling is certainly a positive.