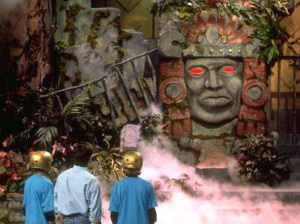 Targeting all millennials with a serious bout of 90s nostalgia, The CW just ordered a reimagined adult version of the iconic Nickelodeon reality competition series Legends of the Hidden Temple. The new show will preserve many elements of the original series, but scale up the stakes with tougher challenges and bigger prizes. Luckily, one of the original creators of the 90s show, Scott A. Stone, will serve as an executive producer for this new Legends of the Hidden Temple. Quibi announced this adult reboot of the series back in 2019, and luckily The CW was able to save it and go ahead with production.

Airing from 1993 to 1995, the Nickelodeon reality competition series featured tweens competing in various physical challenges for prizes. There were four iconic teams — the Red Jaguars, the Blue Barracudas, the Silver Snakes, the Orange Iguanas, and the Purple Parrots — and the best challenge was easily the intense, neon-colored hike up the Temple Run. The set design was based on the Indiana Jones movies, as the Temple Run is filled with booby traps galore. Serving as host and instructor was Olmec, the giant talking Mayan head with a voice that would make Morgan Freeman quiver.

The CW’s reimagined version will incorporate many of these elements, but instead of competing in a studio set, the challenges will be taken to a “jungle.” And say goodbye to the tween teams, the show will feature adult competitors instead, and therefore the challenges will be harder but the prizes will be bigger. Every episode will follow “a hero’s journey through a mysterious jungle,” capturing the teams’ attempt to enter Olmec’s Temple, retrieve a lost treasure, and return it to its owner. This is the latest addition to The CW’s growing alternative programming, and snapping up the rights to a classic series like Legends of the Hidden Temple is a great way to gain more attention and boost numbers.

This actually isn’t the first remake of Legends of the Hidden Temple, as  Nickelodeon released a TV movie version of the series in 2016. However, this was not a reality competition version, but instead a fictionalized narrative inspired by the show. The film followed three siblings undergoing a real-life obstacle course when they ditch a jungle tour. The original host Kirk Fogg, as well as the voice of Olmec, Dee Bradley Baker, reprised their roles in cameos in the film. While The CW version seems to be more faithful to the original series, let’s hope they’re able to snag Fogg and Baker again.

Legends of the Hidden Temple does not yet have a premiere date, but we’ll keep you up-to-date on future news. You can watch the complete original series on Paramount+ now.