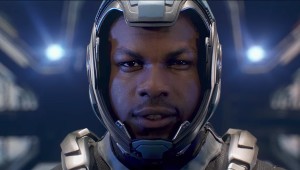 John Boyega has exited Netflix movie Rebel Ridge mid-shoot with “family reasons” cited by the streamer as cause for the abrupt departure.

The production is currently paused but we understand Netflix is working hard to find a replacement for the Star Wars actor and someone is likely to be drafted in in the next few days. Filming began on May 3rd in Louisiana.

A Netflix spokesperson told us: “Rebel Ridge is pausing temporarily as we look to re-cast John Boyega who needed to leave the project for family reasons. We remain committed to Jeremy Saulnier’s extraordinary film and look forward to resuming production. We look forward to continuing our partnership with John Boyega’s UpperRoom Productions, in addition to our upcoming film They Cloned Tyrone in which he also stars.”

This is an unusual turn. Lead actors seldom exit projects mid-shoot. We wish Boyega well with whatever he is dealing with.

Plot details have been kept under wraps on the Jeremy Saulnier-directed project, which is said to explore systemic American injustice in the context of action, suspense and black humor. Filming was originally slated to begin in April 2020 but was postponed due to Covid.