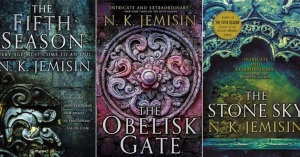 We are living in a golden age of fantasy my friends — whether on screen or on the page. A long-overdue adaptation of N.K. Jemisin’s bestselling series The Broken Earth is finally been developed by TriStar Pictures. In a whopping seven-figure deal, Jemisin will adapt the series herself in her first screen credit. Each entry into The Broken Earth series won the coveted Hugo Award for Best Novel, the first trilogy to do so. It is considered one of the most popular adult fantasy series in recent years, and launched Jemisin as one of the most beloved fantasy writers in publishing.

The first novel is called The Fifth Season, published in 2015. It takes place on a planet with one giant continent called the Stillness, in which every few centuries its people experience a “fifth season” of catastrophic climate change. The series teems with Jemisin’s characteristically dense and creative worldbuilding. Bringing together fantasy and the Anthropocene, Jemisin’s novel won rave reviews, and turned Jemisin into a household name. Her most recent sci-fi novel, The City We Became, was published last year and featured on the New York Times bestseller list.

As millennials grow older their love of fantasy has not diminished, most likely thanks in part to J.K. Rowling’s Harry Potter series and fantasy’s successful revival with Game of Thrones. Studios left and right are quickly grabbing up any fantasy IP that they can get their hands on, and I’m surprised that The Broken Earth trilogy wasn’t picked up earlier, particularly with its timely message and engaging storytelling (we said it should be picked up back in 2019). Although I will admit the series will be hard to adapt due to its scope and size, but hopefully TriStar sinks enough money in the production to make it truly sing.

Netflix has been one of the preeminent content creators of fantasy in the past few years, achieving great success with The Witcher (Season 2 here we come!) as well as the recent adaptation of Shadow & Bone. But other studios are quick to challenge the still number-one streamer. Future fantasy adaptations include The Red Queen at Peacock, the beloved Percy Jackson series at Disney+, and A Court of Thorns and Roses adaptation at Starz.

The Broken Earth adaptation does not have a release date, but hopefully, we’ll get some great casting announcements soon.