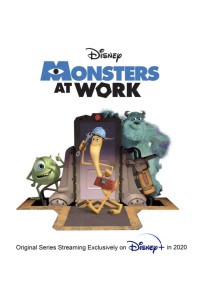 It’s time to go back to Monsters Inc., as Monsters At Work has dropped a new trailer, as well as a new official premiere date. Billy Crystal and John Goodman are back and this time, they’re trying to make children laugh in order to fuel the city. Mike and Sulley are in charge and when Tylor (Ben Feldman) comes to scare kids, he’s brought into this new world of laughter.

We first met Sulley and Mike back in 2001 when they were suddenly in charge of a young girl named Boo. When their scare goes awry, the two have to protect this child from the world of monsters while trying to get her back to her own bedroom — and realizing that kids’ laughter is even more powerful than their screams. Then, we got to see Sulley and Mike before they were even working at Monsters Inc. in Monsters University. This new series feels like the right continuation for this originally scary duo.

Monsters At Work premieres on Disney+ this July 7. See Sulley, Mike, and more team up to make kids laugh and stop the scares of the monsters before them in the trailer below:

Here’s the official synopsis for Monsters at Work:

Monsters At Work takes place the day after the Monsters, Incorporated power plant started harvesting the laughter of children to fuel the city of Monstropolis, thanks to Mike and Sulley’s discovery that laughter generates ten times more energy than screams. It follows the story of Tylor Tuskmon, an eager young monster who graduated top of his class at Monsters University and always dreamed of becoming a Scarer until he lands a job at Monsters, Incorporated, and discovers that scaring is out and laughter is in. After Tylor is temporarily reassigned to the Monsters, Inc. Facilities Team (MIFT), he must work alongside a misfit bunch of mechanics while setting his sights on becoming a Jokester.