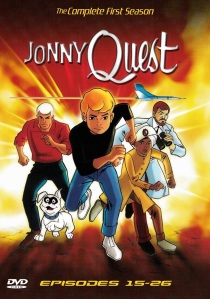 It’s been a while since we’ve had any updates on Chris McKay‘s live-action Jonny Quest movie. McKay joined the long-gestating project in 2018 when he replaced Robert Rodriguez as director, but we haven’t heard anything since that initial announcement. Until now.

Speaking with our own Steve Weintraub ahead of the release of The Tomorrow War, McKay offered an update on the Jonny Quest movie, confirming it is not the next film on his plate, but teasing what makes his vision different and exciting, as he compares his take on the popular Hanna-Barbera franchise to Raiders of the Lost Ark.

When asked why he was excited about tackling the Jonny Quest franchise, McKay responded in a way that would make Vin Diesel‘s Dominic Toretto proud:

“What I like about Jonny Quest is that it’s kind of a family that you make. We have all of your favorite Jonny Quest characters, and then some deep dives. Jonny is a character who experienced grief. His mother died, and it’s about how the people around you can help you overcome grief. At the end of the day there is something about that.”

Jonny Quest debuted in 1964 with an animated show created by Doug Wildey over at Hanna-Barbera Productions. The series was inspired by radio serials and action-adventure comics, following a young boy named Jonny as he accompanies his scientist father on exciting adventures.

Even though The Flintstones is credited as the first major TV cartoon aimed at adults, having aired on prime time, one could argue Jonny Quest took that idea and fully ran with it. The show featured more realistic art and character designs than anything Hanna-Barbera had produced before, feeling more like a predecessor to Indiana Jones than a follow-up to The Flintstones. Even though it starred an 11-year-old kid, the show featured enough high-stakes action to rival modern action blockbusters. This last part is what McKay wants to bring over to his live-action adaptation:

Sadly, that last bit reveals that the movie has still not been given the greenlight by the studio to begin production, but the Raiders of the Lost Ark comparison is enough to get us excited for whenever the project moves ahead. In the meantime, McKay‘s The Tomorrow War premieres July 2nd on Prime Video.