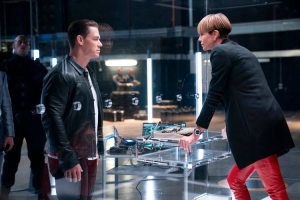 Universal’s F9 grossed in one day what some movies have made in a weekend during the pandemic, earning $30M on Friday, on its way to a revised 3-day of $70M. It’s an amount achieved on a pure theatrical window, which is expected to be around 45 days, and that’s important to note: So far the movies that have opened to big numbers this summer ($50M+) are those respecting the theatrical window, F9 and A Quiet Place Part II (which speaking of windows, had a great hold in weekend of 5, -32% with $6.2M). In fact, the top four movies this weekend were those strictly available in theaters. Warner Bros.’ In the Heights, which is also available on HBO Max right now, lost 1,106 theaters in its third weekend due to its misfiring at the B.O., and F9 entering the weekend as the widest release to date during the pandemic in 4,179 theaters. We’ll see whether Disney’s Black Widow changes the game when it opens in theaters and on Disney+ Premier (for $29.99) on July 9; the Marvel movie now expected to open to $80M+. No matter how big the opening weekend might look for Black Widow, remember this: Marvel movies make $1 billion WW, and at least $300M domestic. Can Black Widow see those types of numbers if it’s also available on Disney+ simultaneously and future robust ancillaries? Hmmm…

No question about it, that’s the best opening day and weekend we’ve seen during the pandemic, and more proof that moviegoing is getting back on its feet.

How is that? F9‘s opening day and weekend are ahead of such pre-pandemic hits as Sony’s Bad Boys for Life (opening day $23.6M, $62.5M 3-day) and even Universal’s Fast & Furious spin-off, Hobbs & Shaw ($23.6M opening day, $60M opening). Realize that F9 doesn’t have 40% of Canada due to Ontario being closed, Toronto’s province, which further illustrates how great F9‘s opening weekend is. Also realize this: F9‘s Los Angeles box office over Friday-Saturday bested Hobbs & Shaw by close to 30%. And that’s without the Arclight and Pacific Theatres being in the mix. What this underscores is that the gross finds a way: When a big movie theater closes, the audience migrates to another one in the marketplace.

Beamed Universal Domestic Distribution President Jim Orr this morning, “F9 The Fast Saga has ignited the domestic box office and set the industry on its way to a great summer.  The Fast family led by Vin Diesel was sorely missed by audiences around the world with the results this weekend in North America extremely gratifying, proving that audiences are desperate to be in theatres for a truly immersive experience.”

Any of the entertainment financial analyst naysayers who aren’t impressed by this weekend’s results and claim that we’re far from opening a movie at $100M need to digest the obvious: F9 in the tenth movie in a franchise that is 20 years old. The fact that F9 is posting results ahead of Hobbs & Shaw is impressive enough.

Unfortunately, with most offshore markets not being as vibrant as the US, if F9 is suffering anywhere, it’s overseas. Fate of the Furious pulled in $1.2 billion WW and Hobbs & Shaw $759M, and it’s quite conceivable this is where the Universal sequel will greatly fall short, despite a $204M win in China and this weekend’s stateside results. However, all of the tentpole launches this summer will have to contend with offshore markets which are trying to ignite. F9 cleared close to $38M in 45 offshore markets this weekend, including new territories UK and Mexico, raising its overseas haul to $334.8M, $404.85M WW; officially the highest grossing movie during the pandemic, surpassing Warner Bros. Tenet ($363.65M).

Updated: F9 is booked in a US marketplace that has 79% of 5,88K theaters open. In addition to LA and NYC, the following markets are operating at 100% capacity: Miami, Orlando, Chicago, Dallas, Houston, Boston, Phoenix, Minneapolis. Overall, 44 states in total are now allowing theaters to operate without any capacity restrictions. Colorado, Hawaii, Idaho, New Mexico, Oregon, and Washington are among those with auditorium cap limits.

Still, those audience speedometers are enough to revive summer moviegoing. If we complained about product for slowing us down in recent weeks, it’s only going to get busier and crazier from here, with such movies as Disney’s Black Widow (July 9), Paramount’s Snake Eyes, and Universal’s Old (July 23), Disney’s Jungle Cruise (July 30), and Warner Bros. The Suicide Squad (Aug. 6) in the next six weeks. However, it pays to note that F9 is being released on a pure theatrical 45-day window. Not all the movies coming out this summer will be released on such terms, i.e. the Warner Bros. and Disney movies, so we’ll have to assess those dynamic windows results as they happen on a case by case base. Despite Cruella hitting $71M to date, industry sources believe the pic’s Disney+ Premier PVOD tier is impacting the pic’s overall revenue, not just at the box office, but in the movie’s downstream ancillary revenues.

F9 drew 57% guys, with 51% under 25, with 46% between 18-34 years old. There’s always a diverse pull with the Fast & Furious movies, and this one was 37% Hispanic, 35% Caucasian,16%  Black and 8% Asian/other. The West was the best for F9, as well as the South. LA delivered nine of the top 25 highest-grossing locations, while producing all of the top 5 best theatres. Imax and PLF repped combined 24% of the pic’s business to date, which is extremely healthy. PLF count at 750 repped 16% of the gross, while 358 Imax screens accounted for 8%. Top markets for F9 were 1. Los Angeles 2. NYC 3. Dallas 4. Houston 5. Chicago 6. San Francisco 7. Atlanta 8. Phoenix 9. Washington DC 10. Philadelphia. Top 5 theaters in the nation for F9 were all in the Los Angeles DMA: AMC Burbank, AMC Citywalk at Universal City, LA Live Regal, AMC Block Orange in Anaheim, and Regal’s Irvine Spectrum.

Universal Filmed Entertainment Group Chairman Donna Langley was instrumental in moving F9 forwarded one year to a time when it was then perceived exhibition would be getting back on track from the pandemic. Good things come to those who wait, and that was a very smart call in regards to dating. Uni, due to the pandemic, capitalized on blasting off the F9 marketing campaign first during Super Bowl 2020 with a trailer drop timed to a Miami concert with the pic’s stars and soundtrack performers, and again this year during the Big Game; both huge successes.

There’s a handful of movies which get promoted through the NBCUni Comcast corporation via its various tentacles –the Symphony program–with promo spots running across every network and digital platform within the NBCUniversal portfolio, including a co-branded Olympics trials promo, placement in the Belmont Stakes, the Stanley Cup Playoffs and the U.S. Gymnastics Championships all anchored by Vin Diesel recreating one of Dom’s trademark speeches from the franchise. F9 spots ran during the NBA Finals on TBS and TNT. Extending the theme of rival brothers, a custom spot, voiced by Vin Diesel, was created with Giannis Antetokounmpo and his basketballer brothers that ran on ESPN during the first round of NBA Finals.

F9‘s trailers have earned more than a billion views. The one dropped in April showcased the nostalgia and franchise history with the Tokyo Drift boys, Queenie Shaw behind the wheel, etc. The most recent trailer was surrounded by several supporting tactics, including the first-ever live broadcast on Twitter Spaces, with the cast and filmmaker Lin appearing an hour after the trailer had been unleashed and garnered a massive reach of nearly 30 million Twitter accounts.

To celebrate the 20th anniversary of The Fast Saga, Universal and its exhibition partners across the U.S. launched “Fast Fridays,” a free nationwide screening series of all eight previous Fast films.

F9 digital content included multiple featurettes, dedicated character social posts, clips and GIFs. Fast GIFs have been viewed more than half a billion times on Giphy per Universal. Viral videos reposting over a year from the pre-Super Bowl party stands at healthy 20:1 given 30 videos are posted on the Fast Saga dedicated YouTube channel with 1.6M subs for the series.

Entertainment social media analytics corp RelishMix says that the Fast Saga is one of the most social film franchises, now at 1.3B across Facebook, Twitter, Instagram and YouTube, “over indexing in all social-quads against comps on the action-adventure genre by 3X and 4X”. The F9 cast continues to leverage their social star power at 581.3M across Facebook, Twitter and Instagram at 43% of the SMU social media universe. F9 is fueled by 435.2M YouTube views and the official Facebook page with 54.4M fans. Platform segmentation of 341.6M Facebook fans, Facebook video views at 217M from 93 videos and into FB owned Instagram 243.3M at 62% of the entire SMU driven by cast verified FB and IG pages. Historically, segmentation favors YouTube, but Universal has gone where their fans are, on FB.

In regards to the muscle of the F9 cast on social, RelishMix calculates that Vin Diesel’s social media universe is at 178.1M, Cardi B’s at 144.8M, John Cena with 82.3M Tyrese Gibson with 57.1M, Michele Rodriguez has 24.5M, Sung Kang counts over 17.4, Charlize Theron 17.3M, Jordana Brewster 12.1M as well as Hellen Mirren’s 947K on IG. Talent-posted character vignettes on their social media handles totaling more than 6M views across all platforms. Additionally, a “Women of Fast” featurette spotlighted the Anitta track “Furiosa” from the film’s soundtrack and was shared to her 53.8M Instagram followers. The franchise also launched its new TikTok account which has received 75M views.

One notable piece of social media was on Lin’s IG, with selfies of the cast thanking the world: