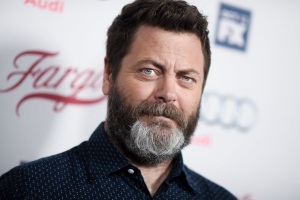 In a rather inspired bit of casting, Nick Offerman has been cast as the manager (i.e. coach) of the team at the center of Amazon’s A League of Their Own series.

THR broke the news, reporting that Offerman will play Casey “Dove” Porter, the show’s version of Jimmy Dugan, the character played by Tom Hanks in the original 1992 movie. Dugan was based in part on MLB Hall of Famer Jimmie Foxx, who used to coach the Fort Wayne Daisies of the All-American Girls Professional Baseball League.

The trade describes Dove as a former Cubs pitcher who was expected to be a star in the major leagues before he blew out his arm early in his career. Now he’s looking to make a comeback by turning the Peaches into champions. THR also explains how Dove earned his nickname, but I’ll leave that one a mystery for the show.

Hailing from creators Abbi Jacobson and Will Graham, A League of Their Own is an hour-long series about the women of the AAGPBL. THR says it’s expected to examine issues of race, prejudice, equality and sexuality, all of which remain relevant to modern audiences. The trade notes that several surviving members of the AAGPBL served as consultants on the pilot, which was directed by Jamie Babbit. Jacobson and Graham reportedly received the blessing of original star Geena Davis and director Penny Marshall prior to her death in 2018.

Best known for his hilarious turn as Ron Swanson on NBC‘s Parks and Recreation, Offerman recently starred in FX‘s Devs and Fargo, and he’ll soon be seen alongside Seth Rogen in Hulu‘s high-profile limited series Pam & Tommy, about the world’s most infamous sex tape. I’m a big fan of his casting in that show as well as in A League of Their Own, as I can totally see him posting the lineup card and heading out to the mound to chew out the Peaches’ pitcher. The big question is whether he’ll don his trademark mustache or not.

Offerman currently lends his voice to Fox‘s animated series The Great North, and he’ll soon be seen in the Netflix series Colin in Black and White. The diehard Cubs fan continues to host NBC‘s Making It, on which he’s also an executive producer.