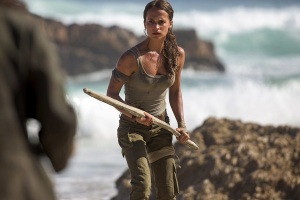 The so-called “video game movie curse” has struck time and again when even the most talented of filmmakers attempt to bring a video game to the big screen, but 2018’s Tomb Raider is one of the rare video game movies that was not only good, but is actually getting a sequel. Hopefully.

Directed by Roar Uthaug, the film was an origin story for Tomb Raider character Lara Croft with Oscar-winning actress Alicia Vikander filling the lead role. The film struck an Indiana Jones-esque tone and while the adventure story had thrilling action, it was also grounded in emotion and character thanks to Vikander’s performance and a plot that found Croft trying to retrace her father’s final steps before his disappearance.

The film grossed nearly $275 million at the box office, and in September 2019 it was announced that Ben Wheatley (High-Rise) was coming onboard to direct for a March 2021 release date. But due to the pandemic, filming was delayed and Wheatley exited the project, only for Lovecraft Country creator Misha Green to sign on as Wheatley’s replacement in January 2021.

Green is writing and will direct Tomb Raider 2 – which has a working title of Tomb Raider: Obsidian – so when Collider’s own Steve Weintraub spoke with Vikander recently during the press day for The Green Knight, he asked if the Tomb Raider sequel was still happening. The Man from U.N.C.L.E. actress revealed that while she’s hopeful, the movie isn’t quite a done-deal just yet:

“Pre-COVID, I would’ve said yes. And now I think it’s a yes still. It’s not greenlit, but the script is in the making, and I think everyone is excited and I would love to revisit Lara again.”

Vikander added that she hasn’t read a script yet, noting that Green is hard at work:

“It’s very recent. It’s really now when the world is up and running again [that the script is being written], and Misha is onboard and she’s working on the script right now. So I’m very excited to sort of read something very soon.”

The first Tomb Raider struck a great balance between adventure and character drama, so hopefully the sequel – assuming it gets the greenlight – can do the same.