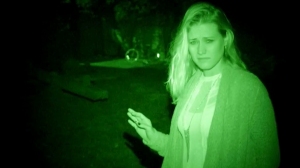 More than a decade after the film arrived in theaters and helped spark the found-footage trend that dominated the late 2000s, Paranormal Activity is getting a reboot. But the 2007 film didn’t just inspire a new horror trend, it was also the movie that helped launch Blumhouse, the production studio that has become one of the most dominant force in horror filmmaking in the years since. With the upcoming Paranormal Activity 7, it appropriately marks the first time Blumhouse is fully rebooting a piece of their original IP. And it turns out, the movie is already done.

With The Forever Purge now in theaters and available on VOD, I recently spoke with producer and Blumhouse founder Jason Blum for a wide-ranging episode of Collider Connected, where he revealed that the new, still-untitled Paranormal Activity reboot is already finished.

That might not come as a huge surprise for folks keeping a close eye on the project’s timeline, but it is the first official status update we’ve had since the “unexpected retooling” was first revealed in February 2021. And some things have changed since then. Initial reports had the film pegged to a March 2022 release date, but ViacomCBS CEO Bob Bakish recently revealed that the film is set to premiere on the streaming service Paramount+ by the end of 2021.

So I really encouraged all the creative people involved to think of something new. A lot of people who are going to go see the new Paranormal Activity were 3 years old when the first Paranormal Activity came out, so they don’t even know from those older movies. I thought if you were going to re-do it, you better really re-do it, not try and expand what we did all those years ago.”