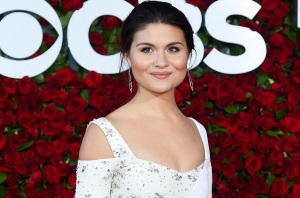 Apple has nabbed an Emmy nominee and Hamilton star for their upcoming drama series, The Shining Girls. According to Deadline, Phillipa Soo has joined the cast of the Apple TV+ series, adapted from the best-selling 2013 novel by Lauren Beukes, in a series regular role as the “intelligent and sure-footed” Jin-Sook.

The Shining Girls stars Elisabeth Moss as a Chicago reporter recovering from a brutal assault, who finds her sense of reality shifting as she hunts down her attacker. Not much else is known about the series, but Soo joins an already star-studded supporting cast, including Wagner Moura (Narcos) as Dan, a veteran journalist following the story of the attack, and Jamie Bell (Rocketman) as Harper, a mysterious loner.

Soo was nominated for a Primetime Emmy this year, in the Outstanding Supporting Actress in a Limited Series Musical category for her work in Hamilton. In addition to originating the role of Eliza Hamilton on Broadway, she also appeared in Natasha, Pierre, and the Great Comet of 1812, and originated the title role in Amélie on Broadway. She has appeared on-screen in films like The Broken Hearts Gallery and Over the Moon, and on television in The Code. She most recently appeared in the Spectrum Original series The Bite, from Robert King and Michelle King.

In addition to starring, Moss will executive produce through Love & Squalor Pictures alongside Lindsey McManus, and Leonardo DiCaprio and Jennifer Davisson through Appian Way. Beukes, author of the original novel, and Alan Page Arriaga will also serve as executive producers on the project.

The Shining Girls joins a slate of upcoming drama series from Apple TV+, including Mosquito Coast with Justin Theroux, Lisey’s Story, written by Stephen King and starring Julianne Moore, and Hedy Lamarr, starring and executive produced by Gal Gadot. No release date or further information has been released about the series.