Synopsis – A female assassin has 24 hours to get vengeance on her murderer before she dies.

My Take – Considering the quick successive releases of films like Gunpowder Milkshake, Jolt, The Protégé and this latest Netflix feature, it seems like the female assassin genre, irrespective of their quality, is being reincarnated.

And while, unsurprisingly at first glance, this Cedric Nicolas-Troyan (The Huntsman: Winter’s War) directed film too seems overly familiar with its classic assassin seeking revenge tropes audiences have seen for decades, it does offer an unique approach to the material under the guise of simply repackaging better/more original action flicks.

However, through some strange alchemy, all of these parts, a gender flipped but comparatively watered-down version of Crank (2006) and setting inspired by the Kill Bill films, come together to make a film that works better than it has any right to, thanks in no small part to its heaping helping of style, and a story that is effective, surprisingly emotional and led by sober feelings of remorse and atonement.

Sure, this stylish, ultra-violent and wildly over-the-top action thriller isn’t the one that’s going to revolutionize the genre, as it goes around checking all those post-John Wick boxes (with the same producers onboard), but it sure does mightily engage, especially Mary Elizabeth Winstead, who is absolutely brilliant as the stern-faced assassin on the run who wields tremendous power and strength even as her onscreen character is slowly died of radiation poisoning. 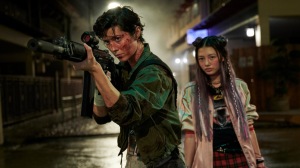 Set in a hyper-realistic, saturated-neon Tokyo, the story follows Kate (Mary Elizabeth Winstead), who for the past 12 years or so has been working as an assassin and expert sniper eliminating targets chosen by her trusted mentor and handler, Varrick (Woody Harrelson). But now Kate finds herself tired, numb, and wanting normalcy, a life with some kind of peace.

Unfortunately she has to put retirement on hold, when she ends up botching one of her final jobs and finds herself diagnosed with acute radiation poisoning caused by Polonium-204, giving her only twenty-four hours to live.

Determined that her poisoning was part of a revenge plot undertaken by Kijima (Jun Kunimura), the head of a Yakuza family, for killing his brother, she begins slashing and killing through the Tokyo’s underworld in pursuit of him, finding an unlikely sidekick in Ani (Miku Martineau), who thinks Kate is a real life-terminator and is oblivious to the fact that Kate is the one who made her an orphan.

As expected, the film isn’t strong on story or character development. Especially considering how the film seems to be making an effort to use Ani to bolster Kate and remind you of the innocence Kate lost due to Varrick training her to be a killer from a young age. However, there is a lack of chemistry between Varrick and Kate to really make their father/ daughter relationship notable.

Ultimately this one too is like most action films, whose more appealing moments come when someone is being chased, hurt, or killed, than when things are quieter, and the focus is on getting to know the characters and the story behind all the action.

Despite its certain familiarity, the style and violent action largely gives the film legs to survive and entertain, with one ill-advised neon-under-lit CG car chase going too fast and too furious for its own good, but otherwise a succession of undeniably visually impressive action sequences which boast a vicious amount of bloodletting and violence, particularly refreshing after neutered stuff like this year’s disappointing Snake Eyes.

A particular highlight is the scene including Japanese musician Miyavi which makes terrific use of space, transforming a modernist penthouse into an arsenal of makeshift murder weapons.

Here, director Nicolas-Troyan certainly redeems himself, infusing some much-needed style into the thriller. For a film that takes place only at night, the film never feels static or visually boring. Setting the film in Tokyo and filling the frame with bright, vibrant colors and unique sets, the film feels electric.

Sure, there are moments where he could have turned the dial down, but credit should be given for a filmmaker unwilling to use nighttime as a crutch.

Undoubtedly, Mary Elizabeth Winstead is the perfect choice to play such kind of role. Since her breakthrough in Scott Pilgrim vs. the World (2010), Winstead has grown into a self-assured actress whose physical confidence, sardonic line deliveries, and shaggy chopped hairstyle has turned into kind of an icon. Here too she is mightily impressive in the action moments when we can see it’s really her, alternately funny and self-deprecating and desperate and determined as the clock ticks toward her inevitable death, and just plain badass throughout.

Woody Harrelson can do this kind of world-weary, duplicitous character in his sleep and he’s as good as you’d expect him to be, alternating between cruel and charismatic. Miku Martineau is terrific and makes for a very likable sidekick. In other roles, Jun Kunimura, Tadanobu Asano and Michiel Huisman are also good. On the whole, ‘Kate’ is an enjoyable ultra-violent and wildly over-the-top action thriller anchored by a physically propulsive performance from Mary Elizabeth Winstead.