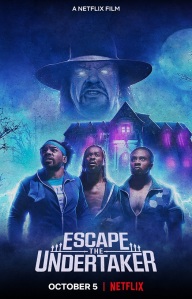 Netflix has released the trailer for Escape the Undertaker, an interactive WWE-themed Halloween Special experience featuring Mark William Calaway, the Undertaker himself. Well, that’s it! This might be one of the most bizarre releases of Netflix’s Halloween programming, and we can’t wait to watch it!

Just as it happens with other Netflix interactive films, like Black Mirror: Bandersnatch and Kimmy vs. The Reverend, Escape the Undertaker will give viewers the power to decide the actions of the Undertaker’s new victims, as they try to escape the wrath of the WWE legend. The trailer follows the horror-themed career of the wrestler by incorporating classic genre tropes such as fog, spiders, and whispers in the dark.

The Undertaker is one of the most iconic professional wrestlers in WWE’s history, remaining active in the ring from 1990 to 2020. He became famous for playing a supernatural entity that uses fear tactics to destabilize his opponents. The Undertaker retired in 2020, after the last episode of the Undertaker: The Last Ride documentary was released. Escape the Undertaker is the wrestler’s first production after his retirement.