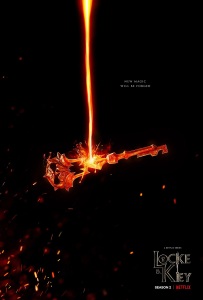 Netflix released the trailer for Season 2 of Locke & Key, the successful adaptation of the comic book series of the same name from writer Joe Hill and artist Gabriel Rodriguez. The second season of Locke & Key comes to Netflix on October 22.

The trailer shows that Nina Locke (Darby Stanchfield) is still coping with the loss of her husband, unaware that her children keep experimenting with the magic keys they’ve found around their new home. High schoolers Tyler (Connor Jessup) and Kinsey (Emilia Jones), and the youngest Bode (Jackson Robert Scott) are still using the powers granted by the keys while they try to figure out where they come from and what dangers do they pose.

However, their careless use of the keys might lead to tragedy, as dark creatures are drawn by their power and enter our dimension. The trailer also teases how a new key will be forged in Season 2, but the powers of this new artifact were not yet revealed. The introduction of the new key is interesting since it was not a part of the original comic, teasing a new path for the TV show. The number of changes that will be made to the new season, however, remains to be seen.

The first season of Locke & Key was not as dark as the original comic books and didn’t fully embrace what makes it unique. Nevertheless, the show was a success for Netflix, with Locke & Key being renewed for a third season ahead of Season 2’s premiere.

Locke & Key’s first season is fully available on Netflix right now, with Season 2 coming to Netflix on October 22. Check out the new trailer below:

After their father is murdered under mysterious circumstances, the three Locke siblings and their mother move into their ancestral home, Keyhouse, which they discover is full of magical keys that may be connected to their father’s death. As the Locke children explore the different keys and their unique powers, a mysterious demon awakens — and will stop at nothing to steal them.