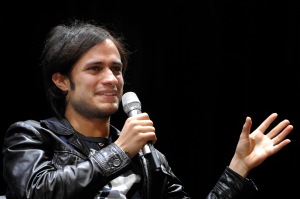 Details remain sparse on the ground as to what Marvel Studios‘ upcoming Halloween Special is actually going to be about, but they’ve at least found their leading man. As revealed by The Wrap earlier today, the Golden Globe-winning Mexican actor Gael García Bernal is set to head the cast of a werewolf-focused show that will air on Disney Plus.

The special, according to The Wrap, is set to begin production in early 2022, far ahead of spooky season. In the know individuals have suggested that Bernal‘s character may be based on Werewolf by Night, the name used by two separate Marvel characters: Jack Russell, who first appeared in a 1972 issue of Marvel Spotlight, and Jake Gomez, last year in the new comic Werewolf by Night.

The former is a descendent of the mystically-altered offshoot of humans known as Lycanthropes. The character eventually becomes able to transform at will, even without the help of a full moon, retaining his humanistic intellect while wielding his furry, clawed paws. As The Wrap notes, Werewolf by Night is also notable for having the first appearance of Oscar Isaac‘s Moon Knight, who will debut in his own Disney Plus series next year.

At just 42-years-old, Bernal‘s career stretches back a few decades: his most notable film roles came under the likes of Pedro Almodóvar in 2004’s Bad Education, and fellow Mexican Alfonso Cuaron in 2001’s Y tu mamá también (known in English as And Your Mother Too). He was nominated for a BAFTA for his role in Walter Salles‘ The Motorcycle Diaries in 2005, and in 2016 he won his first Golden Globe for starring as Rodrigo in Mozart in the Jungle.

Most recently, Bernal starred in M. Night Shyamalan‘s Old, Pablo Larraín‘s Ema and Olivier Assayas‘ Wasp Network. He will next be seen in HBO‘s post-apocalyptic literary adaptation of Station Eleven, which is slated to premier on December 16th.