Synopsis – When a single mom and her two kids arrive in a small town, they begin to discover their connection to the original Ghostbusters and the secret legacy their grandfather left behind.

My Take – The nostalgia cash in train continues with this three-quel which comes in 37 years after the original film.

Released in 1984, Ghostbusters was not just an unexpected commercial success, but also turned into a massive cultural phenomenon with recognizable IP till date. But as it happens most of the time, the sequel, released in 1989, was met with a lesser enthusiastic response, both critically and commercially, effective cancelling the planned third installment, allowing the franchise to survive in other media forms like the two animated TV series (The Real Ghostbusters and Extreme Ghostbusters).

While filmmaker Paul Feig attempted to revive interest in the franchise with 2016’s all-female led reboot (which was later marketed as Ghostbusters: Answer the Call), his perfectly enjoyable film unfortunately found itself becoming the target of fan boys, who unfairly tarnished the whole thing to oblivion. That is until Jason Reitman (Juno, Up in the Air) took up the reins of the franchise from his father, Ivan Reitman, who directed both the original and its 1989 sequel, with a promise to get things back on track.

Thankfully, director Jason Reitman, co-writing with Gil Kenan, (director of the superb 2006 animated film Monster House), shoots his own version of what a Ghostbusters should look like, and thoroughly succeeds.

Sure, like so many other nostalgia driven franchises, this film too concentrates on handing over a familiar property to a younger cast. But even with its emphasis on its new characters, the film is still stuffed with references, inside jokes, and dozens of tiny moments openly designed to appease die-hard fans.

That’s to say that it provides an original story that is still connected to the original film, but also gives the audience time to get invested in the characters and plot, therefore earning its own right to exist. 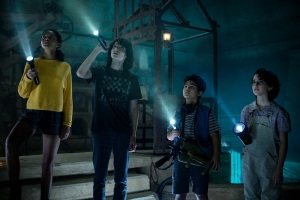 Set 32 years after the events of 1989 film, the story follows Callie (Carrie Coon), a single mother and her two children Trevor (Finn Wolfhard) and Phoebe (Mckenna Grace), who after being evicted from their city apartment move to a small town called Summerville, into a broken-down farmhouse which Callie’s estranged father owned and died in.

But soon after they arrive Phoebe discovers items well hidden in a barn which reveals the identity of her grandfather and his connection to the Ghostbusters, a team of eccentric parapsychologists who closed their ghost-catching business due to a decline in supernatural activities.

But upon realizing that her grandfather’s work maybe connected to the mysterious earthquakes the town has been experiencing, Phoebe teams up with her new friend, Podcast (Logan Kim), and Gary Grooberson (Paul Rudd), their middle school science teacher, to get to the bottom of whatever sinister is lurking.

By allowing director Jason Reitman’s own intimate and personal style of film making to shine through, the film manages to feel fresh despite being a sequel off from two films. From previous characters to supernatural ghosts. It was a lot of fun with the script and direction bringing back and paying homage to the original. However, the most commendable part of the film may be its structure, and how little it looks like the 1984 original, even though the films’ stories share more than a few similarities.

There’s no attempt to form a new team, or to recapture the magic and chemistry of the original stars. Instead, director Reitman focuses on building strong characters and bringing them into the existing IP. Rather than a work of pure reinvention, the film feels more like an expansion of the universe, and of the limits defining what a Ghostbusters film can be.

The film has plenty of fun before the ghosts appear, with Phoebe and Podcast running loose around town, playing with proton packs, forging a friendship based on mutual oddness. When the ghostly action really kicks in later, you can feel director Reitman’s thrill in it, as he uses the same modest directing style as his father. Few flashy shots, but plenty happening on screen.

Many of his effects have a 80s-style simplicity, but subtly so. Sure, the ghosts are a bit goofy, and the stakes may not be earth-shattering, but the fun they have trying to capture the critters is a high-spirited chase coupled with a subtle lesson about the importance of family, legacy, and cooperation. There are also funny unrelated gags, such as Mr. Grooberson getting through summer school by simply running wildly inappropriate horror films like Cujo (1983).

Yes, this film does go back to the originals’ roots a bit too much, evident with the inclusion of mini Stay Puft marshmallow men, and the character of Lucky (Celeste O’Connor), isn’t very fleshed out, but the whole film is so rich with affection for its source that most of these flaws are mostly forgivable.

The performances are also quite good. Mckenna Grace is outstanding in the role, and she echoes Harold Ramis without ever imitating him, making the character uniquely her own. She has to match up with Carrie Coon in the film’s most dramatic scenes and Paul Rudd in its most comedic, and she’s excellent at each.

Matching her toe to toe is newcomer Logan Kim, who is hilarious, charming, and a natural-born scene-stealer. But while Kim provides most of the film’s best jokes, Grace handles just about everything else.

Paul Rudd, Carrie Coon and Finn Wolfhard are equally fun to be around, while Celeste O’Connor, Bokeem Woodbine, Tracy Letts, and J. K. Simmons are wasted in undefined roles.

The original cast comprising of Bill Murray, Dan Aykroyd, Ernie Hudson, Sigourney Weaver, Annie Potts and Harold Ramis (via archival clips, photos and body-doubles) are a delight as always. On the whole, ‘Ghostbusters: Afterlife’ delivers a simple good time with its love for the originals, while firmly establishing its own identity for the newer generation.