Synopsis – The story of Alana Kane and Gary Valentine growing up, running around and going through the treacherous navigation of first love in the San Fernando Valley, 1973.

My Take – Ever since he found critical and commercial success with Boogie Nights (1997) and then received further accolades with Magnolia (1999), over the years, Paul Thomas Anderson has well proven himself as great and interesting filmmaker, with his follow-up films, Punch-Drunk Love (2002), There Will Be Blood (2007), The Master (2012), Inherent Vice (2014) and Phantom Thread (2017) only further establishing his multiple talents as writer, producer and director.

For his latest, which earned three nominations at 94th Academy Awards (Best Picture, Best Director, and Best Original Screenplay), he heads to 1973 San Fernando Valley to tell a conflicting story about the perils of first love and stuffs it with fabulous hammy A-list cameos to double up the satisfaction.

nsurprisingly excellent, director Paul Thomas Anderson‘s ninth feature is also the most easily accessible films of his renowned filmography. Partly autobiographical, this coming-of-age story of a teenage actor and a twenty-something going through self-discovery, is essentially an unconventional romantic comedy, starring two eccentric newcomer leads, but without a traditional narrative.

Sure, with a run time of 134 minutes, the progression of scenes don’t always play a real part in progressing the story along. Yet, thanks to its charming delivery, fine craftsmanship and some hilarious moments, the film is excellently entertaining and heartwarming throughout, resulting in one hell of a fine film.

Set in 1973, the story follows Gary Valentine (Cooper Hoffman), a 15-year-old child-actor and would-be hustler, who on his way to the high-school gym to get his yearbook picture taken, takes his chance to ask out Alana Kane (Alana Haim), a bored 25-year-old old assistant to the photographer.

She is in equal parts amused, intrigued and depressed when this kid starts hitting on her, and she realizes that she is somehow interested in him. Though Alana doesn’t see Gary in a romantic fashion, she’s taken in by his charm and spirit and ends up involved in his life, and that of his circle of friends.

While Alana struggles to establish her adult life thanks in no small part to her emotional immaturity, and the fact that she still lives with her parents (real-life parents Moti and Donna) and her two sisters (real-life sisters Danielle and Este). Gary, despite his youth, is ambitious and determined to be on the top of the world, with only his love for Alana constantly threatening to ruin their delicate friendship.

But we all know, where this is heading. And this hypnotically gorgeous, funny, romantic film freewheels its way around from scene to scene, from character to character, from set piece to set piece, with absolute mastery.

Very similar in tone to director Anderson‘s very own, Punch Drunk Love, and director Richard Linklater‘s classics Dazed and Confused (1993) and Everybody Wants Some!! (2016), the film transports the audiences to another time and place with an underlying theme of how youth cling on to the last threads of their innocence before entering the confusing and unpleasant world of adulthood.

Yes, here, the age difference is definitive, as Gary is a minor, and Alana doesn’t even consider it, but the two are a joy to watch. There is an emotional relationship between them, that too an intense one, and the very plausibility of it is rooted in their own life experiences, which makes Gary, an otherwise goofball adolescent with a the confidence of a middle-aged businessman, fascinating to Alana. 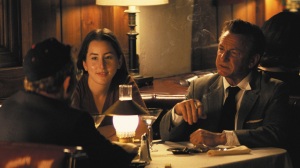 For her part, Alana, too, is passionately energetic, but is always wrestling with insecurities she can’t shake. Without any connections, she is, in effect, a townie, an outsider to her home town’s center of attention and excitement, and, with her natural imagination and lack of a specific art, Gary’s influence seems like a sudden and plausible new possibility for the better life.

While some might feel the enjoyment of the film is probably going to be linked to one’s endurance for the rambling nature of the film’s narrative, as it weaves it’s fictional story around, but as we jump in and out of Gary and Alana’s lives, never quite being told the whole story, we get something more akin to their vignettes of a budding relationship to establish what’s happening.

Some of these sequences work, many of these don’t. And director Anderson is not averse to casually throwing in the insidious sexist behavior of the time, a particularly galling scene being where Alana spends a day at a shop selling water beds in a bikini, for no apparent reason. But every casual line, kiss, automobile-ride, set-up and joke is a joy.

Together, Cooper Hoffman and Alana Haim make for two of the most remarkable and fascinating debuts in recent memory. Here, director Alana Haim, of the pop band Haim (for whom Anderson has directed videos), is superb as the permanently exasperated Alana Kane, a young woman with beauty and charisma, while Cooper Hoffman is the son of the late Philip Seymour Hoffman, who excellently wears what is a difficult role, where he could have easily stray on the side of unlike-ability, but doesn’t with effortless charm.