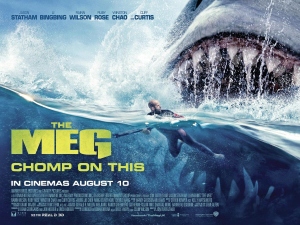 Meg 2: The Trench brings us back into the world of the prehistoric shark starring Jason Statham, and now we have a release date! At CinemaCon during the Warner Bros. panel, news broke that Meg 2: The Trench would hit theaters in the midst of summer beach trip season!

With an August 4, 2023 release date, this will mark a nearly 5-year gap between the release of The Meg and its sequel, but it’s still exciting for fans to get to go back in with Statham as Jonas Taylor. While we don’t know much about the movie other than having screenwriters Dean Georgaris, Ric Hoeber, and Jon Hoeber onboard, and the addition of action star Wu Jing, the release date is the next big thing about the movie we’ve gotten.

The Meg brought us into the Mariana Trench so we could, in theory, be exploring more of the Trench — given that it’s emphasized in the sequel’s title. Even though they killed the mega-shark by the end, that doesn’t mean that there aren’t more of them to come out after Jonas Taylor and his crew. Especially since it was hinted that more than one meg had escaped the Trench.

Collider spoke with Statham back during press for Guy Ritchie‘s Wrath of Man about the film, and he spoke a bit about his excitement about getting back in the water:

“Yeah, we’re gonna start shooting in January. Ben Wheatley is the director. I’m very excited to work with him. I’m thrilled to get going, you know. It’s been a while, we’ve been waiting around for the right script, and the right director to turn up, and we’ve got all those things. They’re all stacked up now. [Ben’s] great. We have a great shorthand already. We’ve got similar tastes, I like his movies, I think he’s a brilliant director. I think we’ve got a good shot of making something good.”

Why we love summer shark movies, I couldn’t say (I’m personally terrified of them and yet watch shark movies often enough), but it’s a perfect time to release the highly anticipated sequel. And who doesn’t love an action movie starring Statham? A summer action movie in the water is the perfect way to end the summer season and we’ve been waiting long enough for a sequel to The Meg!