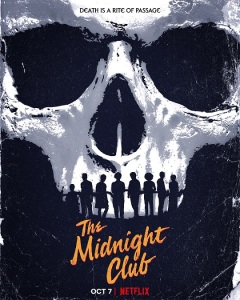 Netflix unveiled the first trailer and release date for The Midnight Club, the next horror series created by Mike Flanagan and Trevor Macy after the critically acclaimed Midnight Mass. While Midnight Mass was an original story developed by Flanagan, The Midnight Club adapts the book of the same name by Christopher Pike.

The teaser opens with the image of the series version of Rotterdam Home, a hospice for terminally-ill children run by a mysterious doctor. There, a group of eight teenagers forms a morbid club that shares horror stories at midnight while they wait for their inescapable fate. After showing the big empty hall of the Rotterdam Home, the teaser for The Midnight Club introduces the main cast of the series, composed of Iman Benson, Adia, Igby Rigney, Ruth Codd, Aya Furukawa, Annarah Cymone, William Chris Sumpter, and Sauriyan Sapkota.

In the teaser, each of the main cast members of the Midnight Club says one verse of a macabre poem. Together, all the poem’s verses read: “To those before. To those after. To those near. And to those beyond. Seen or unseen. Here but not here.” That’s a direct reference to the series plot, as the group of teenagers makes a pact so that the first among them to die must come back to tell the other what’s the afterlife like. But, of course, this pact will have bone-chilling consequences once Rotterdam Home becomes hunted and the Midnight Club starts to be chased by an occult force.

The Midnight club is not the first time Flanagan has turned a famous book into a series for Netflix. Flanagan and Macy previously worked on the hit series The Haunting of Hill House, based on the classic Shirley Jackson novel, and The Haunting of Bly Manor, which was loosely based on several works by Henry James but primarily draws on his story The Turn of the Screw. After The Midnight Club, the duo will also adapt Edgar Allan Poe’s The Fall of the House of Usher into a miniseries starring Flanagan’s long-time collaborator Kate Siegel. The Fall of the House of Usher began filming last January, so it should come to Netflix sometime next year. That would be great, as every horror fan wants to watch at least one of Flanagan‘s TV series every year.

The Midnight Club comes to Netflix on October 7. Check out the new trailer below: