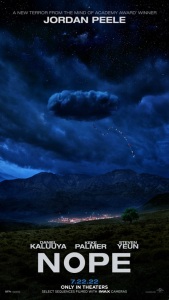 Writer, director and comedian Jordan Peele has changed the game of horror, and he’s only on his third feature film. In fact, his highly-anticipated sci-fi horror Nope hasn’t even hit theaters yet and the buzz for it is only getting louder. In the meantime, Universal has just released a behind-the-scenes featurette with bites from the cast and crew and Peele himself on the making of Nope. If there’s a theme to take away from the featurette it’s that the project started out massive and the payoff is expected to be equally great.

In a vast, wind-blown and dusty landscape, recalling old American Westerns, Peele and his crew have erected the sets that will be subject to the mysterious, alien invasion that Nope‘s trailers tease. Immediately the reverence the cast and crew have for Peele is evident in how they speak on their experience filming, and on the way the director conducts his projects. One of the stars Daniel Kaluuya, who previously worked with Peele on his first feature film Get Out, said, “He’s not trying to rush it, he’s trying to get the moments. There’s a value in what you’re shooting. I mean like the whole crew engaged with it differently.” It’s clear from the featurette that each job is precious on Peele‘s set when he addresses how Nope couldn’t have been pulled off without the team he pulled together.

“My films are always personal. I think it stands apart from my other films in that it’s a bigger adventure than I’ve ever tried to tell.”

As far as the scale of the upcoming film, it was go big or go home. Where Peele‘s previous films felt more intimate and confined in Get Out and Us, just the setting of Nope alone lends to the enormity of the movie. Camera operator Kristen Correll discussed the rarity of the use of 65mm and IMAX cameras together for filming, and with Hoyte Van Hoytema – a favorite of Christopher Nolan‘s – at the helm of cinematography this will most definitely be one for the books. With a record of films like Interstellar, Dunkirk, Tenet and Nolan’s next film Oppenheimer, Hoytema will bring a magnitude as big as that open sky in the trailers, and no doubt he’s getting “the Oprah shot.” In the featurette, Hoytema says, “I could straightaway feel that Jordan challenges himself a lot. He showed from the outset that he was not afraid, so it always meant that I had to challenge myself to come up with more interesting ways to tell the story.”

Very little is officially known about the plot, but the second trailer did provide a bit more insight to the storyline. A brother-sister duo, OJ Haywood (Kaluuya) and Emerald Haywood played by Keke Palmer, see not just horror in the realization of the existence of aliens, but an opportunity to become rich and famous by retrieving the world’s clearest documentation of UFOs. While the first trailer gripped fans in the terror of the unknown, the second revealed the quick humor of Peele‘s first two films. In what seems to be a side storyline, Steven Yeun plays a bizarre character, Ricky ‘Jupe’ Park, who’s seen clad in glam rodeo fashion, rallying a sparse crowd around a mysterious captive – perhaps having something to do with the recent alien invasion.

Addressing the cast and crew of Nope, Peele said:

“Every day of this shoot we were making something new and special and something that is a testament to why I love movies, and I’ll be talking about these days we made this movie forever.”

Nope is written, directed and produced by Peele, with Ian Cooper (Candyman) producing as well and Robert Graff (No Country for Old Men) executive-producing. Appearing in Nope alongside Kaluuya, Palmer and Yeun are Brandon Perea as Angel Torres, Michael Wincott (What Just Happened) as Antlers Holst, Wrenn Schmidt (For All Mankind) as Amber Park, Keith David (The Thing) as Otis Haywood Sr., Barbie Ferreira (Euphoria) as Nessie and more.

Nope lands in theaters on July 22. You can watch the featurette for behind-the-scenes footage below: