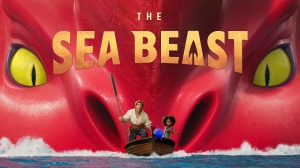 Synopsis – A legendary sea monster hunter’s life is turned upside down when a young girl stows away on his ship and befriends the most dangerous beast of them all.

My Take – With their features Klaus (2019) and Over the Moon (2020) getting nominated for Best Animated Feature at the Oscars, and The Willoughbys (2020) and filmmaker Richard Linklater’s Apollo 10 1/2: A Space Odyssey receiving immense critical acclaim, there is no doubt that Netflix Animation has been killing it. And their latest is no different.

Marking as his fourth directorial effort, Chris Williams, has had a very storied career in animation helming notable Disney features like Bolt (2008), Big Hero 6 (2014) and Moana (2016), and contributed as a writer on Mulan (1998), The Emperor’s New Groove (2000) and Lilo & Stitch (2002). In his latest, director Chris Williams and co-writer Nell Benjamin tackle themes of pirates vs. ocean monsters, while drawing influences from Herman Melville’s classic Moby Dick and DreamWorks‘ How to Train Your Dragon franchise, Pirates of the Caribbean series and Godzilla (2014), to deliver another fun fable about acceptance and forgiveness.

Though the story hits familiar beats, it gets the balance right between rollicking action scenes, the inevitable anti-hunting message about respecting other species’ right to exist and family-friendly humor, but most importantly shows remarkable dedication to building a world without feeling the need to undermine itself with self-aware humor or any hint of contemporary dialogue.

Sure, it won’t exactly surprise you by the way it ends, but if you’re a fan of the tried-and-true formula, it certainly delivers a fun time.

Set in a world were for hundreds of years, sea monsters have surfaced to wreak havoc against mankind, the story follows Maisie Brumble (voiced by Zaris-Angel Hator), an orphan girl, who is great admirer of the heroic exploits of monster hunters as depicted in various books, especially the revered ship known as The Inevitable which is commanded by Captain Augustus Crow (voiced by Jared Harris) and includes Jacob Holland (voiced by Karl Urban), Crow’s second-in-command and the closest thing he’s ever had to a son, and Sarah Sharp (voiced by Marianne Jean-Baptiste), a badass loyal swordsman.

While they return back to the empire following a successful hunt, they are surprised to see the King (voiced by Jim Carter) and Queen (voiced by Doon Mackichan) displeased with Crow for having abandoned pursuit of sea beast, The Red Bluster, in order to rescue fellow monster hunters from another sea beast. Declaring that the age of hunters is over, they instead assign Admiral Hornagold (voiced by Dan Stevens) the task of bringing down Bluster with the royal frigate The Imperator.

But as The Inevitable sets sails to prove themselves again, Maisie joins them aboard as a stowaway to relish on an adventure and forms a bond with Jacob. Both of who find themselves discovering that the true nature of the sea beasts isn’t aligned with what they’ve been told.

Yes, the first act is maybe a bit longer than it needed to be as the film commits a lot of time to its world building – where the beasts are, how they’re tracked, and the culture of monster hunting, but it remains endlessly charming, and the new life Jacob is tossed into, after being so set on one path for so long, makes for an absorbing, awesome character turnaround. And as both Maisie and Jacob learn to love Red, and empathize with sea monsters in general.

The relationship between Maisie and Jacob is the film’s beating heart, as testy beginnings evolve into an unlikely bond. Jacob, like Maisie, is an orphan. The opening scene reveals he was found floating in the sea after a monster attack before being adopted by Crow.

Just as the crew on the Inevitable became his family, so does he to Maisie as they embark on a voyage of learning about the sea beasts outside the Crown-sanctioned story books. It urges them to always question received wisdom, counters the romanticized notion of death as an act of heroism, and reminds them that to the monsters, we could be the monsters.

Thankfully, the monsters aren’t shown to be peaceful and docile creatures, necessarily, but instead, like humans, contain layers and will lash out when threatened. This adds a pleasant bit of complexity to what could have been a much simpler story. It helps that the beast’s design evokes memories of How to Train Your Dragon films. While the creature designs invariably lean towards cute, the design work elsewhere is impressively realistic and detailed.

From the water effects to the sweeping camerawork during the set pieces, the film is striking and gorgeous to behold. In a spectacular sequence of combat choreography, the Inevitable crew hang from the side of the ship to fire harpoons at a beast. The Red Bluster and a Purple Crustacean engage in a kaiju inspired duel. The visuals are not only technically impressive but really pop with key moments that emphasize the scale of the sea beasts or the lush nature of the environments.

The voice cast is excellent as expected with Karl Urban and Zaris-Angel Hator selling themselves as the heart of the film, while Jared Harris brings an edge to Crow’s character as he jumps from a caring father to a gregarious captain to a haunted man with surprising ease. In supporting roles, Marianne Jean-Baptiste, Jim Carter, Doon Mackichan and Kathy Burke are effective, while Dan Stevens is wasted in a role, which disappears soon after. On the whole, ‘The Sea Beast‘ is yer another solid animated adventure from Netflix that is visually spectacular and wholly entertaining.