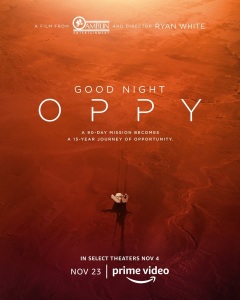 Do you talk to your washing machine? Do you apologize to your coffee table when you bump into it? Any chance you had to hug each of your stuffed animals for an equal amount of time each night before bed as a kid? Well, if so, Prime Video has a documentary film for you. Prime Video released a new trailer for their upcoming film Good Night Oppy today, and let’s just say you should probably grab a box of tissues.

The new documentary film, which is set to be released to Prime Video this November (just in time for Thanksgiving), tells the inspirational (and true) story of Opportunity, a rover that was sent to Mars for what was supposed to be a 90-day mission. However, Oppy outdid all expectations by surviving for 15 years on the red planet. The new film will follow Opportunity’s groundbreaking journey on Mars. But more than that, the film will explore the extraordinary bond forged between the robot’s human makers and the rover that was sent aloft millions of miles away.

The new trailer gives us a look into the technological and emotional aspects of such a long-range project. The trailer starts with a classic shot of a launch into space, with people on the ground and in the control room celebrating. But the perspective soon shifts to a simulation of the rover’s landing on Mars and its first moments alone on the planet. “Yeah, it’s only a robot,” a voice says during the trailer, “but she becomes a family member.” The trailer then shows a glimpse into the years-long journey of Oppy and the scientists back on Earth who monitor the rover’s various adventures.

The trailer explores both the scope of Opportunity’s mission to explore an unknown and wild new terrain and the very intimate bonds built between the rover and its creators. This bond is only intensified by the fact that Opportunity outlived its estimated three-month life span by fifteen years. The new film will certainly give you a new appreciation for the little rover that could.

Good Night Oppy is directed by Ryan White. The film also features the voice of Angela Bassett. The film is produced by Jessica Hargrave, Darryl Frank, Justin Falvey, Brandon Carroll, and Matthew Goldberg. Good Night Oppy will come to Prime Video this Thanksgiving. Until then, you can check out the new trailer below.