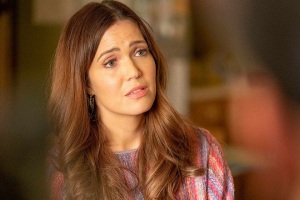 Mandy Moore is set reunite with former This Is Us showrunners for her next television project. According to Deadline, Moore has been cast in the upcoming Hulu series Twin Flames. The series is inspired by the Wondery podcast, which is based on a true story. It follows two women who listen to the teachings of a couple online. The couple tells their audience that everyone has a soul mate, and that they must do whatever it takes to find their true love. The women decide to follow the couple’s teachings, which leads to increasingly dangerous situations. The character that Moore will play has not yet been announced. She will also be an executive producer for the series.

Twin Flames will be produced by 20th Television, who also produced This Is Us. Moore and her production company Roll With The Punches Productions have also signed a deal with 20th Television. The deal will have Moore and Head of Development and Producing Partner Averie Joy Maikalima O Maku Huffine develop and produce series for the studio. “Mandy is one of those rare and exceptionally talented artists who’s as brilliant on the screen as she is off, with a keen eye and natural instinct for uncovering fascinating material,” said 20th Television President Karey Burke. “Working with Mandy over the course of her award-winning six years on This Is Us, cemented our desire to extend our relationship with her, and we are incredibly excited to develop projects together in the years to come.”

One of the other projects that Moore is executive producing for 20th Television is based on the article “My Mom Had No Friends” by Monica Corcoran Harel. The article tells the true story of Harel‘s mother moving to Los Angeles after the death of her husband, to live with her daughter and her family. Since her mother has no friends in Los Angeles, Harel decides to help her mother find friends her own age. This includes posting an ad online, as well as setting up play dates. Harel will write the adaptation, as well as be an executive producer. Huffine will also be an executive producer on this project as well.

“I’m grateful to Dana, Karey, Sharon, Carolyn and everyone at 20th for their support and for giving me and my producing partner Averie the opportunity to continue our creative journey with an exceptional team,” said Moore. “We are thrilled to be developing and producing a number of new series for the studio.”

No release date has been announced for when Twin Flames will premiere on Hulu.