My Take – Ever since their release, The Silence of the Lambs (1991) and Se7en (1995) have continued to remain the epitome of what a serial killer film should be and look like. Thrillers that kept us on edge of our seats throughout their run time, while holding up a mirror, forcing us to explore the grey areas of the human psyche. Though many other writers and directors have tried to repeat the similar success, often through imitation, till date the two films remain unbeaten.

In this latest attempt, director Mauro Borrelli and writer Reggie Keyohara III, both known for their work on the Wesley Snipes starring B-film Alien invasion thriller The Recall (2017), seem to be inspired by a handful of 1990s thrillers most notably the Jonathan Demme directorial and the supernaturally inflected Fallen (1998), starring Denzel Washington, but unfortunately despite a promising set up this one too is let down by its laughably bad script and bad acting all around.

The film just lethargically drifts from one all-too-familiar plot point to the next, with director Borrelli struggling to generate creepiness with material that’s been done before, and much more successfully. The characters also aren’t particularly engaging and have little to no backstory to help us care about them or what’s happening to them.

And while the film tries to liven up the proceedings with sprinkles of dark magic, what it really needed was a less derivative plot. The entire project is so amateurishly done that it’s hard to believe it ever got finished. Sure, there’s some enjoyment to be had here, but I don’t think it’s exactly in the way the filmmakers intended.

The story follows Detective Mary Kelly (Melissa Roxburgh), a young law enforcement official trying to make her mark in the department, who is called in when a statue of an angel created with a real corpse is discovered in a church. Partnered with Jake Doyle (Martin Lawrence), a veteran of the force, who seems to understand exactly what’s going on with the murder scene.

The setting which appears to be inspired by the work of the incarcerated serial killer, Arnaud Lefeure (John Malkovich), better known as The Artist, who over the course of five years had killed six women, painstakingly decorated and posed their bodies in elaborate, quasi-religious public displays, before finally being apprehended by Jake and his deceased partner.

With the confirmation that a copycat is on the loose, Mary requests to meet with Arnaud, to gain insight into the serial killer’s motivations, hoping to earn his trust and learn enough to catch this new killer, all before his scheduled execution in two weeks. While Jake deals with guilt and trauma relating to his last run-in with The Artist, Mary finds herself drawn to the inmate’s polluted mind, creating an uneasy bond between them as the clock ticks down to the discovery of a new victim.

While the core idea here, which it eventually gets around to in its third act, isn’t particularly terrible, its uninspired plotting acts as the film’s real offender. From a story credited to director Borrelli, here, screenwriter Reggie Keyohara III crafts an unimaginative piece that is populated by characters with zero depth and mouth hilariously bad dialogue. The reliance on so many familiar tropes would not be such a big deal if the result were any good.

But the film is so strangely paced that it’s hard to let go of the fact that you’ve seen and heard a lot of this before. All of the creepy intrigue around the way the killer disposes of his victims is lost to the fact that the script can’t seem to figure out what information is important to tell and what’s not. For example, Doyle’s seeming fascination with exorcisms becomes nothing more than a passing phase and Kelly’s relationship with an ex-priest seems creepier than the serial killer himself, simply because he just acts weird and never says much. 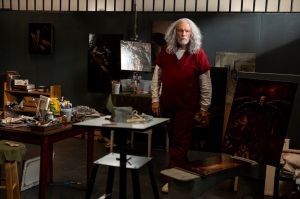 There is also heavy usage of art and religious themes, all which seem to have greater meaning than they do. Obviously, in the end they all surmount to nothing. Even the deaths in the film don’t matter and end up being just fodder for story progression. There’s no moment to even attempt to care about them, or their plight. It feels like the filmmakers are trying to replicate other successful stories, but sadly lack any of the tact to pull it off.

If there’s any other noteworthy element to the film, it comes, perversely enough, in the form of the film’s posed victims. While the rest of the production design feels largely incongruous with the story being told, the ornately costumed and made-up figures are legitimately mesmerizing, each their own little details. While I obviously won’t get into the details of it, the final-act twist is both unbelievable and hilariously pulled off. A twist that left me wondering if it was added last minute just to give a big shock to the audience.

Martin Lawrence was definitely a miscast. Though Lawrence is a worthy talent and memorable part of many of his films, he can’t commit to the tortured gravitas of Jake, who is underwritten and underdeveloped, his trauma shorthanded by showing him swallowing handfuls of white pills. In some ways, this almost feels like this was his answer to Chris Rock’s turn in Spiral: From the Book of Saw (2021). No doubt, he has a great talent for comedy, but Lawrence, for his part, never seems remotely interested in seizing the opportunity to redefine what audiences think of him.

While the script does her no favors, Melissa Roxburgh is also very much out of her depths, failing to believably convey any internalized nuance stemming from Kelly’s complicated past. John Malkovich too is unusually flat as The Artist. Since the character is a religiously obsessed serial killer, there were plenty of opportunities for him to threaten or intrigue him. But here he’s just not threatening. Even Robert Knepper appears in a useless role that adds nothing to the film. On the whole, ‘Mindcage’ is a terrible serial killer thriller that is both unoriginal and ludicrous at the same time.