Synopsis – This story follows Maurice, a goofy streetwise cat, who has the perfect money-making scam. He finds a dumb-looking kid who plays a pipe and has his very own horde of rats, who are strangely literate.

My Take – Though English author Terry Pratchett passed away in 2015, his Discworld series of fantasy novels, which began in 1983, continue to remain immensely popular, with numerous adaptations still under work.

The latest to be plucked from the pages is his cynical twist on the classic Grimm Brother’s fairy tale, The Pied Piper of Hamlin, and is based on his 2001 book The Amazing Maurice and His Educated Rodents. Which while taking place within the Discworld universe, was the first novel of the series to be written specifically for the younger audience. And as one would expect, the resulting animated film is as entertaining and charming as one could hope for.

Directed by Toby Genkel (The Ogglies) and Florian Westermann, the film is a riot of hilarity from start to finish, featuring an impressive ensemble British cast hamming it up nicely around the dazzling animation. Written by Terry Rossio, known for his works on films Aladdin (1992), Shrek (2001), and all five of the Pirates of the Caribbean series, the film firmly balances its satire and sharpness to even keep the adults interested throughout.

Sure, the perky adventure leans a little heavily on its meta-self-conscious storytelling and doesn’t really break any new ground when it comes to animation, yet the film works for a family audience who are just looking for a delightful time at the movies. Plus, Pratchett fans will be left pleased by the Discworld references and lore including the appearance of one very familiar character.

The story follows Maurice (voiced by Hugh Laurie), a wisecracking and conniving ginger tom, who with the aid of a human sidekick called Keith (voiced by Himesh Patel) and a chattering rat pack, which includes Peaches (voiced by Gemma Arterton), Sardines (voiced by Joe Sugg) and their aging spiritual guru Dangerous Beans (voiced by David Tennant), performs the Pied Piper scam. On a typical operation, Maurice sends in the rats, who overrun a village, whipping up fears of a plague. Then in comes Keith playing a flute pretending to be the piper of yore. Voila, the rats exit and the locals pay up Maurice in cash.

It’s a nice little earner, that until they reach the town of Bad Blintz. A town where the inhabitants are starving, the food mysteriously disappearing, and everything is not what they seem. Realizing that they’ll all be out of a job if they don’t solve the mystery, Maurice and his group join forces with Malicia (voiced by Emilia Clarke), the Mayor’s bookworm all-round know-it-all daughter, eventually lead them to the mysterious Boss Man (voiced by David Thewlis).

Throw in the actual Pied Piper (voiced by Rob Brydon), who is clearly a psychopath, and the stage is set for a fair bit of adventurous family fun and a decent dose of mild peril. The plot is straightforward enough to follow even for young audiences, while older ones will doubtless enjoy the riffs on the classics that are aimed at them.

Like the Cheshire cat, the last thing to fade will be your grin. The rats, which are all named after things they found in the dump, are all lovingly rendered with distinctive clothing and characterization. Like the very best of children’s cinema, the film treads below the whimsy of its surface to provide important life lessons of tolerance and fairness. Even death gets some exposure. 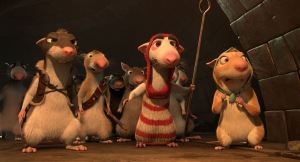 Yes, one can’t help but be reminded of the Shrek franchise as both deal in parodying the world of fairy tales, adding modern twists and dealing with an outer vein of satire. But this one never feels derivative. This is partly due to slightly differing tones, Shrek is about accepting one’s self, whereas here the underlying theme is the ability to go beyond the stereotypes that one may be expected to fulfill.

The animation is simple and energetic with cute characters, and has a cozy feel and warm color palette with a decent amount of visual gags as well as scripted one-liners; yet, it does get quite dark and scary in parts.

However, there were times when I how much its intended audience would respond to the meta commentary of Emilia Clarke’s character Malicia, the clever clogs bookworm daughter of the mayor (voiced by Hugh Bonneville), as she introduces the mechanics of framed narratives and fairy tale tropes to its young audience, while poking fun at the clichés.

The voice cast is littered with British stars. Hugh Laurie is engaging as the lead star and is able to gain enough sympathy despite his outward selfishness. Emilia Clarke manages to be fun presence throughout, despite the unnecessary fourth wall breaking, Himesh Patel easily sells his every man character and David Thewlis channels all the dark and whimsical intensity required to play his mysterious villain.

In other roles, David Tennant, Gemma Arterton, Hugh Bonneville, Rob Brydon, Julie Atherton, Joe Sugg and Peter Serafinowicz do a wonderful job. On the whole, ‘The Amazing Maurice’ is a breezy little animated adventure that provides enough laughs and mystery to keep one entertained.