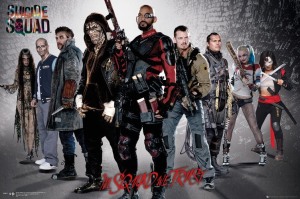 All eyes are on Suicide Squad, David Ayer‘s hugely anticipated DC adaptation, following the catastrophe that was Batman v Superman: Dawn of Justice. Jared Leto‘s performance as The Joker will be weighed heavily against battle-tested, heralded performances by Jack Nicholson and the late Heath Ledger, the latter of which would have to be the best performance ever given in any comic book movie. There’s also a Batman plot to contend with, and the ongoing war as to which side of the comic divide – DC v Marvel – is the most substantial will flair up quickly after its release, much to my dismay. And for Ayer, this will be the test both of his artistic mettle and his ability to handle tentpole properties.

So, it’s a big deal even before you get into what exactly the movie will actually be about. Part of the inevitable, prolonged back-and-forth between what is the best comic-book movie and how Suicide Squad fits into that ranking will involve the pacing, how the story is cut together and how the images move in concert. This is tied directly to the runtime of Suicide Squad, which, according to our sources, is 130 minutes with credits.

We learned this information just as Ayer confirmed that the film is done, and that post-production is completely finished. With the 2 hour and 10 minute runtime, that would make it a mid-range entry in the DC pantheon, as far as post-Batman & Robin goes. To give a bit of context, the unbearable abomination that is Green Lantern clocked in at 114 minutes, which felt like 114 days…in the desert. Meanwhile, Batman Begins is a somewhat breezy 140 minutes and feels expertly paced, as if Christopher Nolan had hired a mathematician to help with editing.

The most recent entries – Man of Steel, Batman v Superman – have stayed around the 150 minutes, and in both cases, there were a lot of superfluous scenes that could have been cut to streamline the narrative and tighten up the rhythm of the imagery. In comparison to Marvel, Suicide Squad is exactly the same time as Iron Man 3, which was both lengthy and incredibly well-paced, as well as imbued with a genuine sense of personality and intimate insight. It’s also in the same wheelhouse as Captain America: The Winter Soldier which, like Iron Man 3, is a tighter movie altogether, giving just the right blend of personal investment in character alongside all the fireworks.

Though I’m always a fan of a solid 90 or 120 minutes, the extra ten minutes on Suicide Squad could easily help flesh out one of the 10-12 major parts in Suicide Squad, without hampering the film with too much story. Then again, this is a DC property, and one can count on an excess of story and exposition as much as one can count on Ayer’s stylistic pyrotechnics to fuel the long stretch of mayhem we’re all looking forward to so much.

Squad is completed! Finished final mix and coloring. Now it's off to the lab and then the world. Nothing like it out there. It.Is.a.Beast.