Synopsis – Two professors team up to locate a lost treasure and embark on an adventure that takes them from a Tibetan ice cave to Dubai to a mountain temple in India.

My Take – Can you believe Jackie Chan is 62 years old & still rocking the silver screen? Sure, looking at his recent filmography you might think that he has seen better days, but who is say that he might still end up surprising you. Here, marking his sixth collaboration with director Stanley Tong (Police Story 3,  Rumble in the Bronx, Police Story 4, The Myth and Chinese Zodiac), this action/ adventure/ comedy was originally announced as a Chinese-Indian coproduction, with Bollywood icons Aamir Khan & Katrina Kaif originally attached, but with Bollywood studio Viacom 18 dropping out of the production, and the stars backing out due to unavailability of dates, this film ended up being a Chinese mainland film with a couple of familiar Bollywood faces such as Sonu Sood (Dabangg, Happy New Year), Disha Patani (M.S. Dhoni – An Untold Story) & Amyra Dastur (Mr X, Issaq). So the question remains, it any good? Partly! This is one of those films that you will really enjoy watching but just when you get all geared up for an exciting end, but end up with a Bollywood level disappointment. There is no doubt the film keeps you hooked to the screens till the very end. It has a little of everything you want in an entertaining film like history, drama, action, adventure and laughter. The worst crime you can accuse a Jackie Chan film of is silliness and this film is supremely silly which can be a whole lot of fun if you are in the mood for some goofy antics. Even the superficial Indian flavor adds to the fun, and the film’s relentless geniality and real pleasures make it better than last year’s Skiptrace, but despite the fun & comical antics, the film becomes tiring after a point of time. The story follows Jack (Jackie Chan), a renowned professor of archeology at the Terracotta Warriors Museum in Xi’an, who is also an authority on the Magadha dynasty of India, and proficient in Kung Fu. However, when Indian professor Dr. Ashmita (Disha Patani) shows up in China with the remnants of a map which may help them find India’s lost Magadha treasure in Tibet, Jack along with his assistants Xiaoguang (Yixing Zhang) and Nuomin (Miya Muqi) decide to help Ashmita & her assistant Kyra (Amyra Dastur) to find & preserve the treasure for national significance. Also accompanying them is treasure hunter Jones Lee (Aarif Rahman), whose father was Jack’s old friend.

Using various new clues and GPS, the group locates the lost Magadha army that had escorted the treasure in ancient times, buried in an ice cave that has been hidden for centuries. However when they are ambushed by Randall (Sonu Sood), a descendent of a rebel army leader who claims a right to the royal treasure, Jack & his team find themselves entangled in an elaborate international chase travelling from China to Dubai and Rajasthan to find the purple gemstone which is a key to all the treasure. The film’s utterly implausible plot opens with a great big Baahubali/ 300 styled battle between Chinese and Indian forces led by animated forms of Jackie Chan & Sonu Sood.  These 10 minutes are the most important portion which paves way to the direction in which the film travels. The first half of the film is a complete entertainment package which takes place in China and Dubai. There is a crazy car chasing sequence that will remind you of a Rohit Shetty films. Because cars getting smashed for no reason, obviously. The second half will somewhere remind you a little of the Indiana Jones series. And let me tell you, there is more Kung Fu than Yoga in the film, some of which is targeted at a pack of hapless hyenas. The Indian actors in the production and the numerous young Chinese cast members suggested that Chan and director Tong wanted to cover all bases. The film promises action & delivers! Watching Jackie Chan’s Kung Fu films is worth all the money you spend on the film. Every Jackie Chan starring film has its share of niftily choreographed martial arts action scenes meshed with comedy. The best joke in the film occurs soon after Jack commandeers a vehicle belonging to a local sheikh in Dubai. In the back seat, of course, is a pet lion. There’s also an awe-inspiring underwater sequence with Jackie and Disha which is shot with the breathless languor of a lama riding across the Great wall. The action eventually shifts to Rajasthan and moves into unabashed Hollywood treasure hunt film mode (Indiana Jones is one of my favorite characters, Jack cheekily says). Chan’s speech to Randall and his crew on preserving national artifacts from grave robbers and smugglers will ensure that if he wants to stage a kung fu fight on top of the Taj Mahal’s yellowing domes in his next film; he will have no problem with permissions. But my favorite action scene doesn’t involve Jackie Chan at all. It features Amyra Dastur (who is as useful as the plot as toppings to a pizza) and two Chinese actors trying to dodge a deep well filled with hungry hyenas. The lengthy heart-in-the-mouth sequence is shot like a video game. The film is also visually good and there is humor at the right places. The fast-paced plotting and typically silly action-comedy sight gags ensure that the 107-minute running time breezes by, but there is little here that hasn’t been seen before, or that Chan hasn’t done better. If Dubai is the perfect setting for director Stanley Tong to fashion a car chase with Bentleys, Porsches and a lion, India is equally apt for the Indiana Jones-inspired sequences involving dangling off vines and being attacked by vipers. The stream of India clichés culminates with a Bollywood-style song-and-dance number at the end of the film; watching Chan enthusiastically perform the dance moves is the best part of the film. 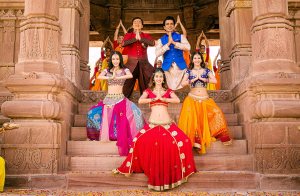 However, the absence of necessity or consistency has its appeal; it guarantees that the film stays unpredictable even as it pilfers shamelessly, piling cliché upon cliché, but rarely in a way that makes a lick of sense. The grandeur goes down due to a weak plot. The culture clash comedy is lazy enough that the film often gives up on it mid-scene. But that’s the way it goes in a film that, true to its title, tends to stick different scene ideas together without much rhyme, reason, or follow-through. Does it need a camel-racing sequence? Or a barfing carsick lion? Or several scenes devoted to futuristic technologies that have zero bearing on the plot? Of course it doesn’t. But that’s Jackie Chan for you. The merger of mirth and mayhem in his personality is achieved with so little stress and so much exuberance that it takes very little for us to believe that Jackie Chan is still enjoying him, dishing out the dolled-up drollery with the devilishly disarming joy of self-discovery. No matter what his vocation, the mission is to set the world right, break bones and bridge fences. This time, he is surrounded by a bevy of nubile Chinese and Indian beauties who have nothing better to do than to giggle and wriggle and sometimes throw in a few punches. The punches and the punch lines belong to Jackie Chan who still speaks queerly exotic English. Many of his dialogues with his Chinese co-stars are meant to be in their native language. Strangely, instead of subtitling, the Chinese lines are dubbed into English, so that the humor of linguistic misapprehension is completely lost in translation. At one point, Disha Patani says, “I didn’t understand what you said” to two characters who are meant to be talking in Chinese but are actually heard by us in English. Aarif Rahman, fights like & acts like Chan. Part of the scenario involves Chan’s mentoring Rahman in kung fu, and their enjoyable sparring and banter takes on another dimension with Rahman demonstrating sufficient star quality and skill to make it seem as if a torch may be getting passed and offers an impressive contrast in the masculinity department to the wispy boy band EXO-idol, Yixing Zhang, the roguish actor with the vibe of a young John Cusack who has his moments to shine. Sonu Sood seems to be enjoying himself, riding a horse with a falcon on his wrist, wearing opulent outfits and saying things like: “Some call it destiny, some call it meant to be, I call it, I make it happen”.  However he is sadly used only to a limited extent and instead seen moving around with a whiff of arrogance and the villainess is rather deliberate. The drop dead gorgeous Disha Patani just smiles throughout the film with minimal acting to do, it’s a good thing the excellent biographical film (M.S.Dhoni) came out first. Miya Muqi & Amyra Dastur look pretty & play their parts well. On the whole, ‘Kung Fu Yoga’ is a fun packed film with enough commercial elements yet letdown by a lackluster story line and ordinary screenplay. It’s a hard truth, that you watch a Jackie Chan film for the stunts, and the fight scenes. With that in mind just completely forget the silly pointless story and wooden acting and enjoy watching Jackie doing what he does best. The action truly does mask over a pretty poor film and so it should!  I came for the action and got way more than I bargained for.