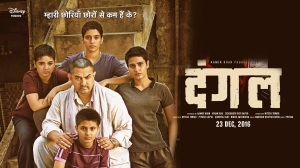 Indian drama “Dangal” crossed the $100-million mark at the Chinese box office Saturday, becoming the biggest foreign-language film of all time in China and reshaping perceptions of the movie market in the world’s most populous nation.

The film opened May 5, going head to head with “Guardians of the Galaxy Vol. 2” and coming second to the Hollywood superhero movie in its first weekend. But as “Guardians” lost momentum, “Dangal” picked up speed and screens.

This week, its third on release and second at the top of the chart, “Dangal” overtook “Your Name,” the Japanese animated smash hit that scored $82 million (RMB566 million) in China last year. “Dangal,” with more than $113 million (RMB780 million,) has now made more in China than in India.

“This is just the beginning of a much bigger story,” added Avtar Panesar, VP of international operations at rival Indian studio Yash Raj Films.

While China and India are neighbors, in recent years they have had little to do with each other in cinematic terms. Most of the few attempts at co-production felt forced and formulaic, with financial concerns put ahead of good storytelling. Warner’s 2009 attempt “Chandni Chowk to China” was a resounding flop; Buddhist philosophical drama “Xuanzang,” which was selected as China’s 2015 Oscars contender, made no impression at the box office in either territory.

“Dangal” is not a stereotypical Bollywood production composed of stars and songs but instead a fact-based drama. It tells of a retired pro wrestler who, disappointed that he did not have sons, teaches his daughters to wrestle. Aamir Khan, India’s most intellectual superstar, produces as well as performs.

That has resonated with Chinese audiences as a female empowerment story. Strong social-media interest, important to the marketing of films in China, lifted “Dangal” from a first week gross of $11.3 million to a second weekend score of $32.5 million. Criticism that the father character is too domineering has not held back what is now a must-see novelty.

“This is such an exciting development,” said Jack Gao, senior VP at Dalian Wanda. “Chinese audiences these days are informed, interested and seeking out diversity.”

For companies representing Indian content, the success of “Dangal” in China is an eye-opener. The film cost a reported $20 million to produce and grossed $83.7 million in India.

“We see that there is no need to try to outdo Hollywood. Drama works in China. Our first co-production in China will be a drama,” said Thakur at Trinity Pictures. “It also reminds us to follow the example of Aamir Khan and put in the hard work. Through determination and multiple visits to China he has become the first Indian actor to be a star in China since Raj Kapoor.”

“This sets a new target for us,” said Francois da Silva, who handles international sales at Arka Mediaworks, which is releasing the other current Indian sensation, “Baahubali: The Conclusion.” His film, a fantasy action film made on a colossal scale, has been bought for China by E Stars, the same company that is distributing “Dangal.”

“Baahubali” will release in China in July, and Da Silva is hoping to benefit from a heightened interest in Indian films sparked by “Dangal.” The first installment of the series was released in 2015 but grossed only $7 million in China. Da Silva says that the producers’ target for the first “Baahubali” film had been to beat “PK” and make $20 million.

“With ‘Baahubali: The Conclusion’ we are now at $220 million worldwide, without China. Our target now is for China to give us the biggest lifetime score of all time for an Indian movie,” Da Silva said.