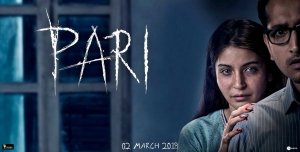 Synopsis – Pari is a supernatural horror film in which a man attempts to help a woman named Ruksana, an abuse victim, who he found chained up in a hut.

My Take – As I have stated in many of my reviews before, if there is one genre that Bollywood continues to lack with no sense of improvement, it has to be horror. It’s true that there have been numerous successful horror films in the recent past, but barring a few exceptions, none of them could really claim to thrill the audience, let alone be riveting or even frightening. And with the commercial success of recently released 1921, it seems like filmmaker Vikram Bhatt is going to continue his mission of plummeting the genre to an infinite tomorrow with more pointless sequels. Thankfully, that’s not the case here, as this is not just one of Bollywood’s better horror films, but also among the most uniquely conceptualized ones I have ever seen or heard off. Far away from ugly ghosts, black magic and many such tried and tested formulas of horror in our Indian films, this film is not only an enjoyable horror film with an intelligent plot but surprisingly is also technically very strong. The plot is macabre and for a change you get to experience the devil in its true colors, one that is unstoppable, brutal, unforgiving and indescribable. Backed by A list actress, Anushka Sharma, who after NH10 (2015) and Phillauri (2017), yet again sinks her teeth into a role devoid of glamour, a sign for welcome break from earlier trends. Sure, the film’s shoddy writing makes the experience quite jumbled and chaotic, especially in the second half, but keeping in mind the Bhatt tagged garbage we have been served for years, this spine-chilling film from debutante director Prosit Roy serves as an improved attempt to display horror in Bollywood films. Set in Kolkata, the story follows Arnab (Parambrata Chatterjee), a kind-hearted commoner whose life unknowingly spirals out of control after this father mistakenly runs over an old lady (Preeti Sharma), in the outskirts of the city during a heavy rain, right after he and his family met a potential bride in the form of Piyali (Ritabhari Chakraborty), a nurse. A police investigation leads them to the mysterious lady’s home, a dilapidated hut in the deep jungles which for some reason is surrounded & protected by stray dogs, once they get inside they find her daughter named Rukhsana (Anushka Sharma), bruised and chained.

Feeling responsible for this now motherless girl, Arnab brings her home despite her lack of social skills and her scared demeanor. Eventually with Arnab’s help Rukhsana begins to slowly sheds her savage ways and tries to make progress but there’s something wrong with her, as she continues to have anxiety attacks, and finds herself in the pursuit of a one-eyed persistent professor Kasim Ali (Rajat Kapoor), who is willing to strip her off of any form of relief including finding refuge in Arnab’s company. The film’s plot delves into Rukhsana’s terrifying identity, all the while revealing the motives of her hunters. I think it was quite obvious from the promos itself that this one was never going to be your usual Bollywood horror film, with revenge or an unrequited musical love story at the base, but it does have some clichéd tropes. Borrowing heavily from folklore and the Quran, (particularly the Ifrit, the most powerful and dreaded jinn), the film sheds the baggage that comes with the bastardization of Bollywood horror and delivers a film that is as thrilling as it is nauseating. In doing so, it reinvigorates a genre that has been marred by cheap thrills and jump scares. The first hour of the film has enough jump-in-your-seat moments, and director Prosit Roy ensures that the atmospherics contribute to the scares. Curtains sway eerily as Rukhsana stares glassily into nothing, seeing bloody, crazy versions of herself all over the house. There aren’t too many special effects, and director Prosit Roy relies on make-up and Sharma’s ability to transform her face from childlike to terrifying in a matter of moments. But as the story moves forward, he also feels the need to establish a connection and some sort of a love story between Arnab and Rukhsana. So the ghostly activities take a break while songs play in the background and the two characters enjoy cups of tea and watch cartoons on TV. There’s an eerie setting throughout the film that creates an air of wicked anticipation. Something unfathomable and as we wait with bated breath, the imagery is violent enough to leave one squirming, almost queasy. What strikes you from the onset here is its unique plotting; unlike anything seen in any horror film, be it Hollywood, Korean cinema, or any part of the world, leave alone Bollywood and while you do wonder where Director Prosit Roy and his co-writer Abhishek Bannerjee are getting at in the first half, things come thrusting to a head post the interval, with all the pieces falling in place, leaving you both in shock and admiration at their balls to firstly, come up with such an innovative premise, and secondly, having the conviction to pull it off. In fact, where the film triumphs is in refusing to play its gore for cheap thrills, which is why even though there’s ample blood and spine-curdling violence, especially the scenes depicting the cruel ways the anti-Satanist revolution goes about in annihilating evil, it assumes the grammar of a thriller. What works mainly for the film is that it has been designed with intelligence and an attention to detail. The usual formula of jump scares, haunting background music, and dramatic scenes of being possessed have been intelligently replaced with the sound of eerie silence, melancholic music and an ever-present mist of paranoia and dread. The biggest respite is that the film isn’t a sleaze horror show which tacky ghost faces. A fair amount of intelligence reflects in practically every frame of the film. Director Prosit Roy does not give you shrieks when you are waiting; it turns up most unexpectedly and will knock the daylights off you. It’s as though the makers knew what really would get the audience’s attention and coated it with an additional layer of scare. Not only does the film shy away from drowning itself in the worst horror tropes but it also peppers the film’s proceedings and story with quirks, and twists that although not unique, seem at least accomplished.

In fact, the film actually manages to utilize its tropes in a way that makes one want to invest in its universe. As I mentioned before, the film is also technically competent, and director Prosit Roy receives production support in plenty. The costumes, hair and make -up, and background music being noteworthy. To be fair, the film isn’t without its problems. Prosit Roy’s direction may be dexterous enough, but the script, co-written by him, lacks zing, mainly as when we expect to be duly rewarded for our patience post-interval, we realize that this film isn’t so much about horror as it is about gore. It’s just too much blood and torture, gut-wrenching cries of pregnant women and Satan-invoking chants that make it a difficult film to watch. More disappointingly, they even break their own rules that they had established for their characters earlier in the film, and that’s a strict no-no for any story set in a make-believe world, be it horror, sci-fi, or fantasy. Like, whenever needed, Rukhsana can fly through the air, or scramble down drainpipes and at the same time be helpless when chained. Among other things, some of the information about Rukhsana’s background remains fuzzy right till the end. There is also a conversation between Arnab and his fiancée that flirts with a needless intellectualization of the goings-on in the film. Fortunately, that exchange is so brief as to barely matter. It is unnecessary anyway, since by then the film is well on its way to fulfilling its goal of frightening the living daylights out of the viewer. Also, the chills and thrills, which consistently keep you on edge and your spine bone tingling for two-thirds of the film, come to a screeching halt in the denouement, giving you the feeling that makers run out of ideas to scare you as the climax approaches. Yet, due credit must go to producers Anushka Sharma, Prernaa Arora, and Arjun N. Kapoor for backing director Prosit Roy‘s rare vision, which despite all its failings still manages to stand when quality in Bollywood horror is brought into question. The film is also elevated by some strong performances. Anushka Sharma keeps finding new and captivating ways to announce to the world why she’s one of the country’s greatest actresses at the moment, with performances that any actor would give and an arm and leg to have as part of their repertoire. Here, she is a perfect combination of innocent and enigmatic, frail and fearsome as Rukhsana. She delivers an image-defying performance that is designed to elicit pity and dread in equal measure. This is a role that sees her climbing walls like Spider-Man and turning into a blood-sucking vampire, while also managing to evoke an authentic sense of displacement and vulnerability and she is expertly convincingly through it all. Parambrata Chatterjee (Kahaani) is also quite earnest, sincere, and sufficiently vulnerable in a role that demands exactly that of him, a nice guy. These two central artistes have solid backing from veteran Rajat Kapoor, who is utterly chilling, and his shadowy gang, and from newcomers Preeti Sharma and Ritabhari Chakraborty. On the whole, ‘Pari‘ is a delightful psychotic horror which despite a faulty second hour deserves a watch for its uniqueness and brilliant visual storytelling.