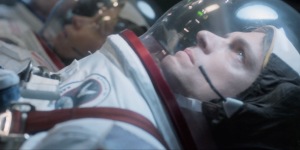 At WWDC, Apple revealed the first trailer for their upcoming series For All Mankind. Created by Ronald D. Moore (Battlestar Galactica), Matt Wolpert, and Ben Nedivi, the series takes place in an alternate reality where the USSR, not the United States, was the first country to land on the moon. This defeat spurs the U.S. even more to commit to space travel to find a way to go further than the USSR.

It’s an interesting premise that kind of hearkens back to Interstellar and the bizarre truth that the United States made it all the way to the moon and then kind of just lost interest. Of course, the Space Race was a product of the Cold War, and once that ended, space travel became seen as a luxury rather than a point of national pride. However, if you look at all the advances that came from scientific research into the Space Race, you’ll see that it yielded greater dividends than just feeling good about America. I’m curious to see how the series will spin this out further and if the show’s quality indicates what to expect from Apple TV+ in the future.

Check out the For All Mankind trailer below. The series arrives on Apple TV+ this fall and stars Joel Kinnaman, Michael Dorman, Wrenn Schmidt, Shantel VanSanten, Sarah Jones, and Jodi Balfour.

Here’s the official synopsis for For All Mankind:

For All Mankind is created by Emmy® Award winner Ronald D. Moore (Outlander, Star Trek, Battlestar Galactica), Matt Wolpert and Ben Nedivi. Told through the lives of NASA astronauts, engineers and their families, For All Mankind presents an aspirational world where NASA and the space program remained a priority and a focal point of our hopes and dreams.