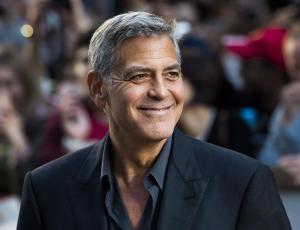 It’s officially official: George Clooney has a new film coming out this year. Netflix took to Twitter to announce that filming has wrapped on Clooney’s latest directorial effort The Midnight Sky, which is an adaptation of the Lily Brooks-Dalton novel Good Morning, Midnight. Clooney produced, directed, and stars in the film as Augustine, a lonely scientist stationed in the Arctic who races to stop a group of astronauts from returning home to a mysterious global catastrophe—with Felicity Jones playing one of those astronauts.

Netflix also revealed, along with a set photo, that The Midnight Sky will be released later this year. So that puts Clooney back in the potential awards race, although it’s admittedly been a while since he was considered by the Academy as a filmmaker himself. 2005’s Good Night, and Good Luck was a massive critical success and earned Clooney Best Director, Picture, and Original Screenplay nominations. Since that time, however, his directorial efforts have wavered between the just fine (Ides of March) to the tedious (The Monuments Men) to the nearly-there (Suburbicon). Will The Midnight Sky be a return to form? Here’s hoping.

The set photo reveals that Clooney reunited with his Catch-22 cinematographer Martin Ruhe on this new film, having worked with the DP on the Hulu limited series adaptation of the iconic novel. The ensemble cast for The Midnight Sky also includes Kyle Chandler, David Oyelowo, and Demian Bichir, and while Netflix has a number of awards contenders to juggle later this year—from David Fincher’s Mank to Ron Howard’s Hillbilly Elegy—I’ll be curious to see where The Midnight Sky lands priority-wise. Or if it even is an awards play. Perhaps this is just a nice sci-fi drama from Clooney.

Check out the set photo below.

That's a wrap! THE MIDNIGHT SKY, from director and star George Clooney, is coming later this year. pic.twitter.com/51aMNjelF9