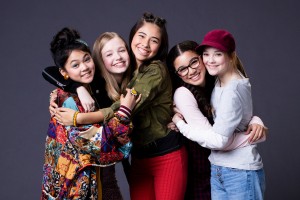 Netflix has finally unveiled the poster for The Baby-Sitters Club, an updated adaptation of the beloved Ann M. Martin novels us elder Millennials grew up on in the ’90s. The  Baby-Sitters Club books introduced a generation of young readers to a group of friends looking to make a little extra money while coming-of-age together. Now, a whole new generation will be introduced to the titular baby-sitters: Kristy Thomas (Sophie Grace), Mary Anne Spier (Malia Baker), Claudia Kishi (Momona Tamada), Stacey McGill (Shay Rudolph), and Dawn Schafer (Xochitl Gomez).

The Baby-Sitters Club poster not only gives us our first look at the new, young cast playing characters we know and love, it also recreates the iconic cover from the very first book. As Netflix’s See What’s Next Twitter account showed us with a side-by-side shot, the young cast is arranged to emulate the cover of The Baby-Sitters Club #1: Kristy’s Great Idea. In addition to the very fun and very bright new poster, Netflix also release new images of the Baby-Sitters Club cast in costume. Among the new images, which include solo shots of each actor, is a very fun and heart-warming group photo of all the teen stars.

“Netflix’s new series The Baby-Sitters Club is based on the best-selling book series, that follows the friendship and adventures of Kristy Thomas (Sophie Grace), Mary-Anne Spier (Malia Baker), Claudia Kishi (Momona Tamada), Stacey McGill (Shay Rudolph), and Dawn Schafer (Xochitl Gomez) as the middle-schoolers start their babysitting business in the town of Stoneybrook, Connecticut. Rounding out the cast, Alicia Silverstone plays Elizabeth Thomas-Brewer, the selfless single-mother of Kristy Thomas and love interest of all around good guy Watson Brewer, played by Mark Feuerstein.

Martin, the person we have to thank for The Baby-Sitters Club in the first place, will serve a producer on the Netflix series. Rachel Shukert (GLOW) is the series showrunner and Lucia Aniello (Broad City) is an executive producer and director. Additionally, Walden Media’s Frank Smith and Naia Cucukov, who developed the series, will executive produce, too. The Baby-Sitters Club Season 1 will consist of 10, 30-minute single-camera episodes.

The Baby-Sitters Club is coming to Netflix later in 2020. Check out the new poster below: