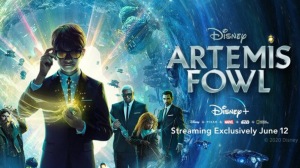 Synopsis – Artemis Fowl, a young criminal prodigy, hunts down a secret society of fairies to find his missing father.

Mainly as in contrast to the young wizard with the lighting scar on his forehead, its titular protagonist shares all the trademarks of a James Bond villain (as described by the author), and is a self-confessed legal mastermind who evolves into an anti-hero and a sympathetic character over the course of the eight books.

Though the series didn’t turn into a billion dollar cultural phenomenon, it sure was successful enough to garner a live action adaption. An adaption which has been in development hell since 2001 with shooting taking place only in 2018, then found its release pushed a whole year owing to the Harvey Weinstein scandal, and then finally scrubbed from a theatrical release due to the COVID-19 pandemic, finally enabling it’s move to the fairly new streaming channel, Disney +.

An odd move, considering its hefty it’s $125 million price tag, but having seen it, I can see why Disney made this decision. Without beating around the bush, let me be clear – the film is really bad! Even though a talented and well acclaimed director like Kenneth Branagh is at its helm, the adaption is nothing but a disjointed, disappointing and deflated supposed adventure which ends up offering confusion more than thrills.

Though I haven’t read any of the novel, I was seriously overwhelmed with how the whole film, despite an obvious earnest effort in the technical department, ended up being wound up in a half-baked fairy story. Awkwardly staged and filled to the brim with expository dialogue that is appreciably tricky for a palpably ill-at-ease young cast to deliver, it honestly just sucks whatever little of the magic is left. But most surprisingly, the lead himself is pushed to the background most of the time as the focus is a lot more on the green.

I know that this was made for kids, but that is not an excuse for this film be as bad it is. It sucks because I would like to see more action-adventure films that are made for younger audiences, but they also deserve something a lot better than this.

Narrated by Mulch Diggums (Josh Gad), an overgrown dwarf with a tendency to steal anything and everything, who is taken into custody of the British intelligence, where he informs them the every Irish folklore is real. Existing in the subterranean space of Earth, a whole enterprise of elves, centaurs, Goblins and dwarfs have been living for centuries and thriving especially in Haven City, home to a secret civilization of fairies.

But the main focus of his story is Artemis Fowl II (Ferdia Shaw), a 12-year old human with exceptionally high intelligence, who finds himself in unknown territory when Opal Koboi (Hong Chau), a malevolent dark pixie from Ho Chi Minh City kidnaps Artemis’ father, Artemis Fowl I (Colin Farrell), an illegal antiques dealer, who has apparently stolen an all-powerful magical weapon called the Aculos and hidden it somewhere in their huge Ireland based Fowl Manor.

With Domovoi “Dom” Butler (Nonso Anozie), his bodyguard and Juliet Butler (Tamara Smart), Domovoi’s 12-year-old niece and protégé, by his side, Artemis is determined to go to any lengths to get his father back even if it includes kidnapping Holly Short (Lara McDonnell), an 84-year old elven reconnaissance officer of the Lower Elements Police (LEPrecon), who despite strict orders from her Commander Julius Root (Judi Dench), the 802-year-old commanding officer of LEP, decides to investigate her father’s mysterious death, who also supposedly stole the Aculos, hence finding her paths to cross with Artemis.

Even though it just runs for 95 minute runtime, this adaption is an absolute disaster of a film, as just about every element of the film falls flat. While there are a couple of interesting elements here such as the fairies’ ability to wipe out memories and the time freeze element, the bothersome exposition just pulls everything down. Though it is primarily based on a tongue-in-cheek concept, as a director Branagh by no means correctly commits to that strategy on display and appears afraid to embrace what it must be. And for a film that relies on spectacle and chaotic set-pieces involving magic and otherworldly creatures such as fairies and trolls, the film feels very small and low-stakes.

The biggest problem here is that it is incoherent and that it is an adventure film that pretty much takes place in one setting: Fowl Manor, with Artemis not going anywhere else until the end of the film that too to wrap up the thin plot. The world building could have been good, but it is sloppily executed which makes the world feel shallow.

There’s also a lack of menace, as hard as the film tries. Any time we cut to Artemis’s father chained up in a dark lair, he’s being interrogated by a shadowy figure in a hood. Who is he/she and why should we care? The film doesn’t do a good job of explaining this and it never truly feels like any of the characters are in danger, resulting in a diluted experience.

The characters are terrible too. Artemis is supposedly an evil genius who is close to being a villain in the books, but that doesn’t come through in the film. Outside of portraying him as smarter than the average twelve year old, he is not given much personality and that makes it hard to care about him or his quest to find his father. Hence it is never believable how he makes up with Holly in the most forced way possible and suddenly become good friends after just a few minutes together.

The father-son Artemis dynamic is also as skinny as paper. Instead Holly is the actual coronary heart of the story and deserved to be on the center of the film. And what is with the character of Juliet? She’s introduced as another awesome 12-year-old with extraordinary jujitsu skills and then is given absolutely nothing to do, her character completely inconsequential to events and with no dimension. Is that cynical tokenism or bad writing?

Nevertheless, director Branagh does bring a visual flair to the film, as the underground world inhabited by all sorts of magical creatures is beautifully brought to life by production designer Jim Clay and the many conceptual artists and visual effects crews who worked on the film.

In the titular role, debutante Ferdia Shaw missteps. Though this was his first role, he needs to improve himself because I believe his acting abilities were not to the caliber that a film of this size requires. The supporting cast is also not much better. Colin Farrell is completely wasted on one of the most thankless roles I have ever seen as Artemis’ dad. He gets nothing to do. The same goes for Hong Chau, who I didn’t even know was playing the main antagonist.

Judy Dench can only do so much with the dreadful material that does gives her little to work with. Josh Gad seems to be having a lot of fun in the role and he got some chuckles out of me, but the narration was rather pointless. Nevertheless, debutante Lara McDonnell, manages to be easily the scene-stealer here as there is life to her performance missing from the rest of the ensemble. In other roles, Nonso Anozie, Tamara Smart and Nikesh Patel are alright. On the whole, ‘Artemis Fowl’ is a horrendous fantasy adventure with a dull lead and a lot of talking.