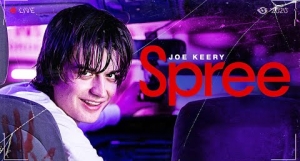 Synopsis – Thirsty for a following, Kurt Kunkle is a ride share driver who has figured out a deadly plan to go viral.

My Take – Born in the late 80s, I belong to an awkward generation who has seen media formats like VHS resonate and then crumble before their eyes, used and moved on from Floppy disks to CDs to USB, but most importantly saw internet penetrate every living home along with social media platforms (some of which don’t even exist anymore) to keep us in touch with friends or relatives we probably wouldn’t otherwise.

While I myself have reveled in every one of these technological advancements, and also found myself running albeit low beat channel on YouTube, but somehow I still struggle to wrap my mind around the massive rise of Internet stars who are called Influencers.

Maybe because I refuse to understand why young adults need to self-promote themselves all in order to receive gift items and receive validation from complete strangers. But I reserve a different kind of loathe for those who make a living by displaying their so-called authentic lives (usually funded by rich parents) to rabid followers.

In his latest film which debuted at this year’s Sundance Film Festival, director Eugene Kotlyarenko gives an exceptionally fun spin to show the desperate need of attention and social media clout that some people need and the extreme places they can go to get it. While not without its faults, it is one of the very few films that seem to authentically capture the visual language and aesthetic of things like live streaming, and the way internet culture enables certain kinds of toxic behavior.

Though some reviews have pointed out the film to be as shallow, personally, I found that it satisfyingly covered several issues with the influencer culture, and does it in a fun and over-the-top manner the way a satire should. It doesn’t try to be some extensive and encompassing analysis but instead focuses on delivering a breathless thrill ride with a deliciously sinister spin while highlighting its message.

The story follows Kurt Kunkle (Joe Keery), a self-proclaimed social media influencer and content creator who makes videos of his everyday life, such as playing video games and driving around in his car for his channel Kurt’s World. However, despite actively posting for a long time his views have been minuscule at best, and barren at worst. Now at his most desperate point, he comes up with a campaign that will supposedly make him go viral, going by the name #TheLesson, with the help of a successful live streamer, Bobby BaseCamp (Joshua Ovalle).

He takes up a job as a Spree ride share driver and hopes to spice his content up by decking out his car with multiple cameras and streaming what goes on with his customers. And as he picks up his first passenger, a seemingly straightforward ride takes a turn when the client reveals his white nationalist ideologies to Kurt, who in turn encourages him to take one of the complimentary water bottles in the backseat. The client drinks some only to erupt in coughs, as a YouTube tutorial flashback of sorts reveals that Kurt laced the water with poison for those who drink it. The day only gets more insane from there, as Kurt progresses further into murderous schemes, each more disturbing than the last.

It’s an incredibly unique setup for a film that essentially feels like a modern-day American Psycho, and seeing it all unfold is quite entertaining, as director Eugene Kotlyarenko manages to keep shaking things up as it goes along, making sure things don’t get too repetitive or stale, not unlike the people watching Kurt’s live stream. While many are likely to compare this film to other psychotic thrillers, it thankfully develops its own voice from its familiar trappings.

Here, director Eugene Kotlyarenko pushes the envelope with a pulsating sense of tension and pace, embracing a handheld camerawork style that fittingly encapsulates its subject matter while being conveyed with aplomb technical ability.

Sure, on the surface, this is a dark satire that uses slapstick violence as a way to shock the audience, but at its core, this is a story about narcissism and desperation for validation that is overwhelmingly sad when taken into account just how dangerous social media is. It manipulates us, shifts our personalities, changes us into completely different people than we were before, and I commend director Eugene Kotlyarenko and co-writer Gene McHugh for being able to carefully underline his story with a thematic weight such as this.

The idea of an inherently awkward kid who lacks the self-awareness needed to build a brand out of himself, wasting his time obsessing over followers, is interesting and heartbreakingly true to life. Especially considering the way Kurt talks is just a few degrees off-kilter, like when he tries to impress internet-famous comedian Jessie Adams (Sasheer Zamata), realizing the potential for his murderous brand of live streaming if it were to be tagged on her feed, he tries a sticky charm offensive that unsettles everyone but him. The film’s searing portrait of the social media generation aptly criticizes the vapid behavior that drives people, observing how many promote themselves for clicks and followers over substantive dynamics.

While the film is always captivating to watch, yet I couldn’t help but feel some of its dramatic potential was left untapped. The script also seemed sanctimonious at times, spelling out its intended message with third act speeches that have the characters turn into ciphers for the screenwriter. I also wish the film did more to give Kurt’s character an arc, with a quick opening montage failing to display his transition from an earnest creator to a deranged killer.

Performance wise, Joe Kerry, whom audiences should recognize as Steve Harrington from ‘Stranger Things’, really carries the film. He shows impressive range in the role, initially evoking deep sympathy from the audience as he confesses to feeling lonely and depressed about being unpopular, but staying resolute in his optimism. And as he embarks ever further in his vengeful rampage, his gleeful, sinister performance has you completely absorbed.

While in other roles, Sasheer Zamata, David Arquette, Kyle Mooney, Joshua Ovalle and an unrecognizable Mischa Barton are good too. On the whole, ‘Spree’ is an entertaining, thought-provoking black comedy that offers a darkly alluring condemnation of influencer culture.