Synopsis – A young female astronaut, who joins a reclusive astronaut aboard a spaceship, struggles with her job as she interacts with mysterious Cargos that appear on the ship.

My Take – Though India continues to play an important role in the space program, with various Indian scientists contributing their theories to subjects of alien life, worm holes and space time paradoxes, science fiction as a genre continues to remain the least experimented in the film industry especially the Hindi speaking sector.

Probably because, while a certain (yet growing) section of the audience has been continuously appreciative of inventive film-making, however, the larger part still remains sincerely attached to watching only mindless Hollywood rehashed entertainers, revenge sagas, social dramas and the current obsession, music infused historical dramas.

For that reason alone, this directorial debut from Arati Kadav, which is backed by stalwarts like Anurag Kashyap and Vikramaditya Motwane, which screened at the Jio MAMI 21st Mumbai Film Festival last year, and released on Netflix this past weekend, deserves to be lauded. For daring to step into an arena which is often considered an anathema to Indian filmmakers.

Despite being reminiscent of filmmaker Duncan Jones’s Moon (2009), here, director Arati Kadav offers a refreshing and humorous take on the ancient Hindu belief of reincarnation, in the garb of a science fiction drama, all the while raising important questions like where do we go after we die? Is there a heaven or hell? Can human beings truly ever let go of their attachments?

Sure, the film suffers from some exigent issues, but it also sees demons live chatting with their fans on social media, making this one quite the unexpectedly fun oddball and unique experience. 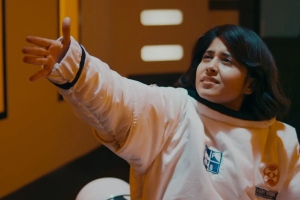 Set in the year 2027, the story follows Prahastha (Vikrant Massey), a demon/homo rakshas, one of the descendants of mythical demons, who have now entered the space age following the signing of the ‘Rakshas Manushya Peace’ Treaty with the human race. And their program, the Inter Planetary Space Organization (IPSO) has launched a series of spaceships for reincarnating recently deceased humans, with Pushpak 634-A, manned by Prahastha, being one of them.

However, while performing his duty efficiently Prahastha has been alone and away from any form of personal contact, with his only constant companion being Nitigya (Nandu Madhav), the demon manager on earth handling his cargo. But things begin to change drastically with the arrival of Yuviksha (Shweta Tripathi), a young and energetic assistant assigned to help reduce his work load that is until Prahastha realizes the real reason for her appointment, and is forced to contemplate a decision soon.

The plot of the film is its biggest strength and the interactions between the recently deceased and the Prahastha being the core which keeps you hooked. Here, Kadav, shows all the signs of a confident filmmaker as she unfolds the story at a relaxed pace, gives room to her characters, and trusts the audience to do their writing. Her narrative is chock-full with tiny but profound gems that are quite affecting.

Like when a man who is being prepared for rebirth asks, “So, is this heaven?” to which Prahastha replies, “There’s no such thing as heaven or hell. Everyone who dies comes here”. The man’s lamenting reply is an eye-opener, when he says, “Then what is the point of doing good on earth if even people who’ve done bad come to the same place after death?” So much for being nice on earth in order to attain heaven!

Such scenes are well balanced with humor, for example, the scene when a man closes the elevator gate to go to a higher floor, and the next moment he enters the cargo drop-off area of Pushpak 634A. He’s just died, of course. But even as he reaches Pushpak 634A, he wants to see his unfinished business to its happy conclusion – he calls up from the after-dead to mop up a lucrative deal he’s been pursuing since ten years.

Since the protagonist is a demon, you might expect moments of horror in the film. But there aren’t any. Our ‘demon’ is endearing and feels lonely at times, even though he might not admit it. Yuvishka’s inclusion benefits the film, elevating it from the morass of sameness and presenting different dimensions of the story.

The production design (by Mayur Sharma), even under budgetary constraints, is impressive. It sticks to the basics, the spaceship’s design is minimalist yet futuristic, comprising a few rooms and devices and doesn’t try hard to impress, thereby not interrupting the story. The film is further elevated by a fitting background score. At some points, it even gives you an adrenaline rush. Especially when a new cargo is about to be delivered to the spaceship.

However, the film does have its share of flaws as well. One being the film’s slow-paced narrative which makes it appear dragged. After a certain point, the film gets repetitive, much like Prahastha’s life, and might make the viewer lose interest. Also, his love story with Mandakini (Konkona Sen Sharma) is briefly touched upon and appears out of nowhere, hence making it feel unnecessary.

Performance wise, as always both Vikrant Massey and Shweta Tripathi excel. Massey brings an earnestness to the character he plays, with nary a hint of hamming in his portrayal of Prahastha. His no-nonsense approach to the fantastical concept makes watching it worthwhile. On the other hand, Tripathi brings in more energy with her spontaneity. Her chirpiness and cheeriness lightens the dreary and morbid environs of the spaceship, and of the film too. Meanwhile, Nandu Madhav is completely endearing.

In smaller roles, Konkana Sen Sharma, Biswapati Sarkar and director Hansal Mehta make for welcome additions to the narrative. On the whole, ‘Cargo’ is a brave venture that deserves appreciation for its innovative concept and for telling an incredibly engaging story.