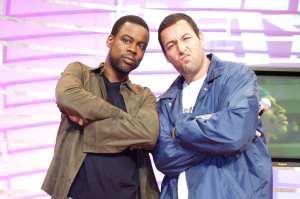 Chris Rock has written a new script that will pair him with his longtime pals Adam Sandler and Dave Chappelle, the Fargo star revealed in a recent interview with the Hollywood Reporter.

Plot details remain under wraps at this early stage in the game, but THR described Rock as “giddy” about the idea. While one would assume the project would be a comedy, judging by the reflective tone of the interview and where Rock currently is in life — doing seven hours of therapy each week — it wouldn’t surprise me if it turned out to be more of a dramedy.

Though they worked together for years on Saturday Night Live, Rock didn’t share the big screen with Sandler until the latter’s 2005 remake of The Longest Yard and eventually, the two Grown Ups movies. They also co-starred together in last year’s Netflix comedy The Week Of. Rock also had a small role as a taxi driver in You Don’t Mess with the Zohan, and played himself in Sandy Wexler.

Rock and Chappelle are comedy contemporaries, of course, who command the stage like few others can. I don’t believe they’ve ever done a movie together, but I’ve always enjoyed Chappelle’s work on the big screen, from Robin Hood: Men in Tights and The Nutty Professor to Half Baked and his more recent dramatic turn as Bradley Cooper’s buddy in A Star Is Born.

It’ll be interesting to see whether Rock calls on his Top Five producer Scott Rudin for this new project. Rudin has also worked with Sandler on Noah Baumbach‘s Netflix movie The Meyerowitz Stories.

Meanwhile, Rock has finished writing a second script described as “Bad Lieutenant, starring an insane actress.” The original 1992 crime drama starred Harvey Keitel as an out-of-control member of the NYPD who uses drugs and engages in threesomes while on the job. Nicolas Cage starred in an unrelated 2009 film that took advantage of the Bad Lieutenant brand and its penchant for excess. I would love to see a female cop go to similar extremes, and can’t wait to see who Rock has in mind, or whether he’d direct it himself.

Rock nearly directed the new Saw movie Spiral, though his shooting schedule for Fargo made that impossible. The trade-off seems well worth it, as Rock as quite good in Fargo as a gangster who the actor calls “the best part” he’s ever had.