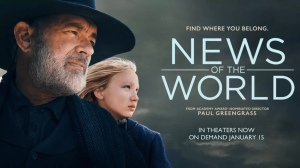 Synopsis – A Civil War veteran agrees to deliver a girl, taken by the Kiowa people years ago, to her aunt and uncle, against her will. They travel hundreds of miles and face grave dangers as they search for a place that either can call home.

My Take – For some incomprehensible reason I will always have a soft spot for Westerns, but, you know what was missing from genre all this time? Tom Hanks. Sure, while the voice of America’s Dad has been previously employed to play Sheriff Woody Pride, the cowboy lead of the Toy Story film series, however in this latest film, all of Hanks, and not just his voice, is out riding a horse and blasting a six-shooter in a grim 19th century.

Here, the two-time Oscar winner reunites with director Paul Greengrass, following their 2013 outing Captain Phillips, for Hanks‘ first ride into the western genre, with a promise of some good old-fashioned storytelling that urges audiences to look beyond expected frailties and find reward in possibilities.

Adapted from author Paulette Jiles‘ 2016 novel by Greengrass and Luke Davies, right from its story to its visuals, the film is wrapped as a complete package of perfect entertainment for anyone who loves a good western.

Yes, the film is little slow paced and not as action heavy as its trailers marketed it, however, the manner with which the heartfelt drama examines loss and the bonding of two unlikely people who met by chance, is sure to entice anyone who just wants a simple story anchored by incredible lead actors. 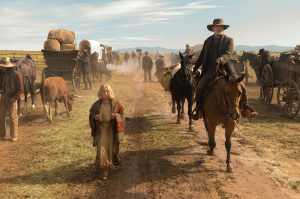 Set five years after the conclusion of the Civil War, the story follows Capt. Jefferson Kyle Kidd (Tom Hanks), a former member of the Confederate Infantry who now makes a living traveling town to town reading newspapers for the populace for ten cents per person. Like any good newsman, he blends the politics and more serious items with humorous human interest pieces, giving the largely illiterate crowds a sense of what it’s like to go through a newspaper cover to cover.

However, following one such evening, during his move to the next town, Kidd stumbles upon the aftermath of some sort of attack or accident that has left a 10-year-old girl behind. Not speaking any English, the girl has a note with her identifying her as Johanna (Helena Zengel), the daughter of German immigrants who were attacked by the local Kiowa people six years earlier as they journeyed across the plains of Texas.

Only the girl was left alive, so the Kiowa took her in and raised her as one of their own. She was on her way to be returned to her surviving aunt and uncle hundreds of miles away, and as sense of responsibility, Kidd vows to escort her either to local authorities or perhaps even all the way to her only living family members.

The rest of the film is the story of their long trip together, through unforgiving terrain, unexpected weather and decidedly human dangers. The trail is long, but it gives them time to learn bits of each other’s language, enough to communicate, and the two form a protective bond that helps them get through the countless challenges of the road. Being certain to avoid most conventional forms of sentimentality along the way, here, director/co-writer Paul Greengrass does a remarkable and touching job making certain nothing comes easy to this unlikely pair.

It’s clear that the film is also about finding one’s way home, like for Johanna her home might be a beat down farm where her relatives have no idea what to do with her, on the other hand Kidd is also desperate to create a home for himself after he lost his version of it during the war, so letting someone like Johanna into his life is more difficult than one might suspect. Keeping that in mind, one of best moments in the film happens to be the one where we understand the loss of both characters and how they are able to cope with all that’s happening in front of them.

Unlike what one might believe the film is not explicitly political. In the sense, it does understand that not everyone who fought in for the Confederacy believed in the cause, some have even carried regret, guilt, and sorrow and Kidd is such a man. Instead the film is more focuses on themes about moving away from a time of extreme divisiveness to one of one of love and redemption. 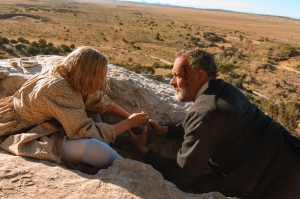 In one of the film’s rare moments of overt commentary about the state of politics today, a certain Mr. Farley (Thomas Francis Murphy), the leader of a radical band of militia working to cleanse the county from outsiders, spins tales to his town’s residents about his history and the history of the town that are fictitious, wants Kidd to only read news stories about him. But when Kidd gets before the eager crowd, he has something different in mind, encouraging free thought and resisting Farley’s version of fake news.

Yes, while the film’s pacing is slow, it never feels too slow by any means. In fact, such leisurely pacing feels appropriate to the more lyrical tone of the film. And even though the film is obviously very different in tone from director Greengrass‘ other films, like The Bourne Ultimatum (2007) and Captain Phillips, he is still able to build up lots of suspense at appropriate times over the course of the film, especially the scene where both Capt. Kidd and Johanna have to out-maneuver a gang of outlaws who mean to cause harm to her.

Director Paul Greengrass and cinematographer Dariusz Wolski also create a vivid recreation of 19th century American wilderness, a land of difficult terrain and occasionally bitter climate. You can almost feel the grime, hear the squelch through muddy streets and choke on the smoke. It practically reeks of leather and wet cattle.

It’s a setting where dogs bark incessantly, dust is everywhere and socks have holes, giving the film the look and feel of a classic Hollywood Western, all enhanced by a wonderfully wistful score by James Newton Howard. And while the conclusion of the film isn’t that difficult to predict, that doesn’t take away from its highly emotional and deeply satisfying conclusion.

Without a doubt, Tom Hanks is great as always, as the film is told from his weary, anguished eyes and his performance here is nothing short of wonderful. Despite the ruggedness of his character, Hanks plays Kidd with an easygoing charm and quiet dignity. He commands the room the same way that Hanks commands a film screen, without trying too hard.

However, it is newcomer Helena Zengel who literally owns the film with a mesmerizing performance as a young girl traumatized by personal tragedy. She can be wild in one scene, defiant later, curious the next and emotionally shut down in another. She speaks volumes even without dialogue. Together, they bring this rugged journey to life. In smaller roles, Thomas Francis Murphy, Mare Winningham, Elizabeth Marvel, Neil Sandilands and Bill Camp leave a mark. On the whole, ‘News of the World’ is a gritty yet gorgeous Western with a soulful message and an emotional core.