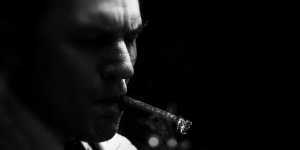 Are you sitting down? Okay, then. Tom Hardy is set to produce and star in Gareth Evans‘ new action movie Havoc, and if that isn’t the greatest sentence that has ever been written, I don’t know what is.

In case you’re wondering why this news is so exciting, Evans is the acclaimed writer-director of the jaw-dropping action films The Raid and The Raid 2. Havoc has been in the works for several months, and it marks the Welsh filmmaker’s return to the streamer following his 2018 folk horror-thriller Apostle starring Dan Stevens. The idea of him teaming with a badass of the silver screen like Hardy is beyond exciting, and wait ’til you hear the logline…

After a drug deal gone wrong, a bruised detective (Hardy) must fight his way through a criminal underworld to rescue a politician’s estranged son, while unraveling a deep web of corruption and conspiracy that ensnares his entire city.

Um, yeah, this movie sounds awesome, and I need it injected directly into my eyeballs, ASAP. No word on a release date yet, but stay tuned, because we’ll be all over this one.

Evans will produce Havoc under his One More One Productions banner along with Ed Talfan of Severn Screen and Aram Tertzakian of XYZ Films, as well as Hardy.

Evans broke out with the 2009 action movie Merantau, and he’s coming off the acclaimed AMC series Gangs of London. In addition to handling writing and directing duties on his films, he’s also an award-winning editor and action choreographer who introduced the Indonesian martial art of Pencak Silat into world cinema with the Raid movies. Additionally, Evans executive produced the 2014 crime thriller Killers and directed the excellent Safe Haven segment of V/H/S/2.

Havoc continues Netflix and XYZ’s relationship, which also includes previous features iBoy, ARQ, Bushwick, I Don’t Feel At Home in this World Anymore, Mercy and The Night Comes For Us., whose director Timo Tjahjanto just signed on to direct the English-language remake of Train to Busan for James Wan‘s company and New Line.

As for Hardy, he was last seen in Josh Trank‘s Capone, and next stars opposite Woody Harrelson in the Marvel sequel Venom: Let There Be Carnage. The English actor earned an Oscar nomination for his supporting turn in The Revenant, and while he’s beloved for his work in Mad Max: Fury Road as well as the Christopher Nolan films Inception and Dunkirk, it’s his work in films like Warrior, Bronson, Locke and Tinker Tailor Soldier Spy that tickles my fancy. Up next for Hardy is Rupert Sanders‘ war movie The Things They Carried.