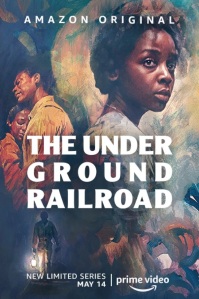 After several weeks of gorgeous teasers, Amazon has finally unveiled the first “official” trailer for Barry Jenkins‘ limited series The Underground Railroad, which is now set to premiere May 14 on Prime Video.

The Underground Railroad chronicles Cora Randall’s (Mbedu) desperate bid for freedom in the antebellum South. After escaping a Georgia plantation for the rumored Underground Railroad, Cora discovers no mere metaphor, but an actual railroad full of engineers and conductors, and a secret network of tracks and tunnels beneath the Southern soil.

Over the course of her journey, Cora is pursued by Ridgeway (Edgerton), a bounty hunter who is fixated on bringing her back to the plantation she escaped — especially since her mother Mabel is the only one he has never caught. As she travels from state to state, Cora contends with the legacy of the mother that left her behind, and her own struggles to realize a life she never thought was possible.

Jenkins, whose drama Moonlight won the Oscar for Best Picture, directed all 10 episodes of the limited series, in addition to serving as showrunner. He also executive produced The Underground Railroad alongside Pastel‘s Adele Romanski and Mark Ceryak and Plan B‘s Dede Gardner, Jeremy Kleiner and Brad Pitt, as well as Richard Heus, Jacqueline Hoyt and Colson Whitehead, the latter of whom wrote the Pulitzer Prize-winning novel on which the series is based.

The Underground Railroad is one of my top-five most anticipated new shows this year, and I can’t wait to bask in Jenkins’ latest vision, which looks both powerful and visually dazzling. Watch the first trailer below, which certainly looks like an Emmy contender, and keep an eye on Mbedu seeing as how Jenkins made stars out of Moonlight‘s Trevante Rhodes and Ashton Sanders as well as KiKi Layne from If Beale Street Could Talk.