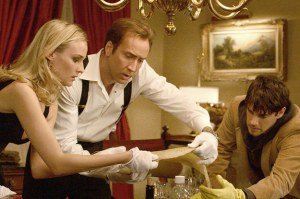 Fans who have been scouring for clues about the future of National Treasure are in luck, as Deadline is reporting that Disney Plus has greenlighted a new TV spinoff series with an order of 10 episodes, directed by Mira Nair.

This new series will hand the reins of the expansive action-adventure franchise over to a new Latina lead named Jess Morales. A twenty-year-old DREAMer, Jess, along with her friends, will become involved in a new adventure revolving around the mysteries of her family tree — while discovering some hidden treasure along the way.

You’ll recall that a Disney Plus series has been in the works at the streaming service for a while now, as Collider originally broke the news last May when we teased an answer out of franchise producer Jerry Bruckheimer about the status of not only a potential National Treasure 3 but a TV show that was also in development:

According to Bruckheimer, the series had been making bigger strides in terms of production status than any potential film sequel. When Collider spoke to him in May, the team behind the show had already finished a pilot script and was outlining the remaining episodes of the first season. Meanwhile, this new announcement is definitely in line with what we already know in terms of the TV show focusing on a younger group of characters.

The project comes from Bruckheimer and original writers Marianne and Cormac Wibberley. Nair is best known for directing films like Monsoon Wedding, Vanity Fair and Queen of Katwe, the latter of which was also through Disney.

Currently, there is no confirmed release date yet, but we’ll be reporting that information as soon as it’s uncovered.