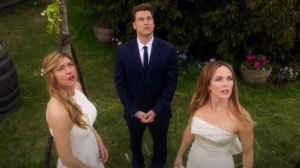 The CW has dropped a trailer for the remaining episodes in the sixth season of DC‘s Legends of Tomorrow at their respective 2021 Comic Con @ Home panel. Board games, magic mushrooms, and bowling are all in store for the Legends team, and these final episodes look to bring lots of the chaos, action, and fun that has become a trademark of the superhero show.

A wedding between Ava Sharpe and Sara Lance/White Canary is rudely interrupted by an alien invasion, an event that causes the team to be abducted from the quaint, backyard ceremony. Sara’s big day is ruined and must be redeemed through a bowling match, a tall order given the team’s lack of skills in the respective sport. From here, it appears that the Legends will employ a variety of tactics to make it back home, from a Clue-like board game titled Beast/Slayers to a trip under the influence of some magic mushrooms.

Lots of other hints were provided for the end of season 6, in addition to new developments for the upcoming seventh season. Namely, Matt Ryan will be taking on a new character by the name of Dr. Gwyn Davies in the next season. Ryan‘s run as John Constantine will sadly be coming to an end in the sixth season, and he had this to say about playing the iconic supernatural detective:

“As everyone who loves him knows, in the end, John Constantine will walk his path alone. The time has come for John to part ways with the Legends, and for me to part ways with John. I’m really excited to be creating this new role on the show and having some fun with it — discovering how this new character fits in and causes some trouble for the Legends.”

Ryan‘s Dr. Davies won’t be the only new character for the seventh season, as series regular Amy Louise Pemberton will portray ‘a flesh-and-blood version’ of her character Gideon. Pemberton has voiced the Waverider’s AI for all six seasons (and portrayed the character’s physical form a number of times), but will now also take on the role in the flesh.

The panel also announced a 21-track mixtape of the series, aptly titled DC’s Legends of Tomorrow: The Mixtape (Songs from the Original Television Soundtrack), that will be released on August 20. The soundtrack will highlight numerous fan-favorite moments from the series, including the David Bowie-inspired “Space Girl” from the latest season, or Brandon Routh‘s “Mr. Parker’s Cul-De-Sac” from the previous season.

DC‘s Legends of Tomorrow airs Sundays at 8/7c on The CW. The sixth season will return with its final five episodes next month, with ‘The Final Frame’ premiering first on August 8.