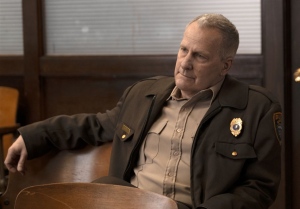 Showtime has just released the first episode of its upcoming drama series, American Rust, for free. In advance of the show’s premiere on September 12, the episode is now available on YouTube, Showtime.com, and Sho.com, and across multiple Showtime partner platforms.

Based on the Philipp Meyer novel of the same name, the series stars Jeff Daniels as Del Harris, the police chief of a small Pennsylvania Rust Belt town, struggling to keep his community together. Opposite Daniels is Maura Tierney as Grace, a local seamstress and mother, with whom Del has an old relationship. When a tragedy threatens to tear the town apart, Del is thrust into the center of the investigation, even before Grace’s son emerges as a prime suspect.

The series was adapted by Dan Futterman, who previously worked with Daniels and co-star Bill Camp on Hulu‘s The Looming Tower. Futterman served as showrunner, and executive produced the series along with Daniels, along with The Looming Tower EP Adam Rapp. Also executive producing are Michael De Luca (Escape From Dannemora), Paul Martino (Inside Game), Katie O’Connell Marsh (Narcos), and Elisa Ellis. Both Daniels and Tierney have worked with Showtime previously, starring in The Comey Rule and The Affair, respectfully. They’ll be joined by an impressive cast here, including David Alvarez (West Side Story), Alex Neustaedter (Colony), Julia Mayorga (It Is Decidedly So), Mark Pellegrino (Supernatural), and Rob Yang (The Resident).

Trading in much of the same sense of hopelessness and austere post-industrial backdrop that distinguished HBO‘s Mare of Easttown, the early release of the first episode certainly seems poised to recapture the word-of-mouth that made that series such a hit. It’s at the very least a sign of confidence from Showtime that the episode can generate buzz in advance of the set premiere date. Here’s hoping that gamble pays off, even without the distinctive accents.

The first episode of American Rust is available now on YouTube, Showtime.com, Sho.com, and Showtime‘s partner platforms. The series will premiere on Showtime on September 12.