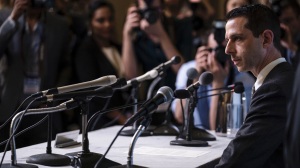 With the Season 3 premiere a month away, HBO has released a new trailer for Succession, their hot, Emmy Award-winning series that promises to go “full f***ing beast” for its latest season. After the COVID-19 pandemic delayed production, the wait has created an incredibly high demand for the return of creator Jesse Armstrong‘s snarky and beloved drama series. Recent news like a confirmed release date, a first trailer and high-profile casting announcements has ensured that fans and newcomers alike will tune in come October, but there are also quite large expectations to live up to.

At the end of Season 2, a predictable, but nonetheless riveting, twist saw number-one-boy Kendall Roy ousting his father publicly, revealing that Logan Roy knew about the cruises scandal and covered it up. This leaves Roman and Shiv Roy to pick their sides as an all-out war ensues between the feuding family. The quietly machiavellian Cousin Greg has sided with Kendall, but Shiv’s husband Tom may be on the fence given the rocky state of their marriage. And it will be interesting to see how the new cast members fit into this new season: Adrien Brody has been cast as Josh Aaronson, a billionaire activist investor who becomes involved in the ownership of Waystar, and Alexander Skarsgård will play Lukas Matsson, a confrontational tech founder.

And confrontational he is — we get our first look as Skarsgård and Brody in the new trailer. Succession‘s black humor is one of the highlights of its outstanding writing, led by the wit and genius of Kieran Culkin‘s performance. Culkin and Skarsgård steal the new trailer with their short scene, where Skarsgård bluntly asks when Roman’s father will die, respectfully of course. This leaves Culkin to respond with, “Obviously, hugely looking forward to my father dying.”

The rest of the tonal shifts in the trailer perfectly mirror those of the series — moments of humor and levity are punctuated by moments of high tension and drama. The first two seasons have really been leading up to this moment, and this season will have to address what it will look like going forward. Will this family feud end at the finale, or play out for multiple seasons?

This might almost be a good time to write out Brian Cox‘s Logan Roy, leaving the company in shaking hands as his children continue to squabble over it. The new trailer points to this being a turning point in the relationship of the four siblings, as Connor Roy looks like he is entering his horse into the race for control of WaystarRoyco. The changing alliances and relationships between the well-written characters define the series and makes this modern, capitalist narrative channel the intrigue of a political thriller. And I can’t wait to see how this all plays out.

Succession‘s third season premieres on HBO on October 17. Check out the new trailer below.