Synopsis – Told with Schrader’s trademark cinematic intensity, the revenge thriller tells the story of an ex-military interrogator turned gambler haunted by the ghosts of his past.

My Take – There is no denying of the fact that ever filmmaker possesses a signature style which he/she spreads over the piece, helping us as an audience, to recognize and separate them from others.

One such identifiable impression belongs to filmmaker Paul Schrader, whose tales often focus on tortured, deeply habitual and solitary men ridden with guilt. With credits that include co-writing four scripts for films directed by Martin Scorsese, including Taxi Driver (1976) and Raging Bull (1980), and his 2018 return-to-form directorial First Reformed, the motifs are rather quite specific, but the filmmaker deploys it to great effect, slowly drawing the audience into the psyche of a man who grows more frightening and more compelling the more you learn about him.

The protagonist of his latest feature is no different, offering another dark and meditative character study that seeks to analyze complex questions relating to vengeance and morality. Grim, mysterious, and unsettling, never more so than when it is quiet and still, without a doubt the film will have trouble finding audience in easy goers, especially as the journey is slow at times to the point of tedium, but for others, the intriguing visuals, the haunting soundscapes and Oscar Isaac’s lead performance will be enough to earn a serious recommendation.

The story follows William Tell (Oscar Isaac), a quiet man, who spent eight years in military prison, where he learned how to count cards. Now he spends his days hopping from casino to casino, playing blackjack and poker, doing just well enough. And even with his card counting skills, he doesn’t play big; he aims for small wins that won’t register with anyone, as William wants to get in and get out, unnoticed.

However, his carefully orchestrated and methodical lifestyle soon begins to sputter out of control, first, when he is approached by a sleek woman named La Linda (Tiffany Haddish), to join her stable of card players across the country, which she links up with wealthy investors looking to back their talent (for a sizable cut of the winnings). And secondly, when William stumbles upon a seminar given by Major John Gordo (Willem Dafoe), his former superior years ago at Abu Ghraib, who taught him everything he knows about torturing and interrogating suspects. 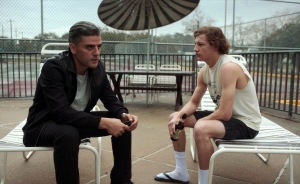 But while William was court-martialed and went to prison for their documented actions, Gordo got away scot-free and now works as a private security contractor. That same night, William meets a college dropout named Cirk (Tye Sheridan), whose father was also trained by Gordo, dishonorably discharged and eventually killed himself. Hence, Cirk blames Major Gordo for his father’s death, and the ensuing hardships he’s had to face throughout his life, and now wants to exact revenge on Gordo, and wants William to help him with his scheme. But that’s easier said than done.

In a time where original films not based on an existing IP are rare, a film like this one is a breath of fresh air. This is a captivating film that pulls you in and doesn’t let go. It doesn’t worry about building a nice, wholesome friendship between two opposing personalities, nor does it have a scene before the final act where the characters argue with each other only to put aside their differences and work together in the end. Instead, the film follows a three-act structure without landing on the cliché story beats we’ve grown accustomed to. None of it is sentimental or theatrical. Moving at a leisurely pace everything is grounded in a quiet sense of realism.

And despite the film’s title and card counting being an enthralling concept on its own, the film isn’t about that. Sure, there are gambling scenes all throughout the film as William attends card games all over the country. However, the larger focus remains on William’s hope for his own salvation. Here, the film pushes audiences to wrestle with one of filmmaker Schrader’s most despicable characters yet, a man who beat, humiliated, and tortured prisoners at the notorious Abu Ghraib prison in Iraq.

He doesn’t make it easy either as he parcels out information, initially focusing on details of William’s daily habits, which include moving from small motel to motel and wrapping every bit of furniture in sheets before settling in. He’s not an outsider seeking to fit into a world that shuns him, but a man who is ashamed by the hurt he caused but also knows the perils of trying to reduce his guilt by retaliating. But Schrader has never been an optimistic storyteller, and his latest is a mostly tragic tale, though it is tinged with hopeful notes throughout, with La Linda represents the temptation of normalcy, a chance to reemerge with a clean slate, and William becomes a father figure to Cirk, trying to steer the boy away from repeating his mistakes. 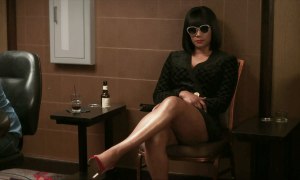 The ultimate justifications the narrative provides may not work for everyone, but you have to admire filmmaker Schrader for continuing to eagerly push buttons at this stage in his career. It’s always hard to know who to root for in his films, and you can almost feel him delighting in putting audiences through the wringer with this one.

He even drops in a few harrowing flashbacks to Abu Ghraib, tearing a hole in the film’s calm, steady surface. We see prisoners being abused and interrogated in images filmed with a heavily distorting wide-angle lens, a visual abomination as well as a moral one. As filmmaker Schrader bluntly invites the audience to reflect on the legacy of Sept. 11, including the crimes that Americans have committed in the name of justice.

And while it works well as a character study, the film stumbles in little ways like the dropped story-line that pits William against an obnoxious gambler known as Mr. USA, and in order to accommodate this deep dive into the darker side of William’s psychology, the three supporting characters are all given short shrift.

But the best thing this film does is reaffirm the fact that Oscar Isaac is indeed an often overlooked and ingenious performer. Here, Isaac is a marvel in the lead role, self-contained and coiled, a human ruin in a good looking costume. He seems disciplined and methodical, but Isaac clearly conveying the character’s emotional torments, erratic tendencies, and interpersonal challenges.

Tye Sheridan too is strong and thorough as well, and Tiffany Haddish’s supporting performance offers some necessary humor in an otherwise serious narrative. And although veteran film actor Willem Dafoe is fine, as you’d expect, he is greatly underutilized here. On the whole, ‘The Card Counter’ is an excellent meditative character study that provides illuminating insights about guilt, control and redemption.