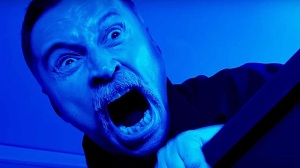 The further adventures of the madman Begbie have been teased by actor Robert Carlyle, who played the wildcard character in two Trainspotting films, directed by Danny Boyle. Carlyle told NME, in an interview promoting his show COBRA, that he and Trainspotting author Irvine Welsh have been shopping around a television spinoff focusing on Begbie.

“Irvine and myself have been chatting quite a lot recently with a couple of excellent producers in London… As you know there was another book called The Blade Artist which is just entirely about Begbie and his mad story. It’s still in its early moments but it’s looking pretty good that this will happen eventually.”

Carlyle said that the “massive story” will take Begbie all the way from Edinburgh to Los Angeles and back again, and that they’re thinking about doing it as an event series:

“I think we’re thinking about doing it as six one-hour ‘television event piece’, as they say nowadays. Whatever that means. But it seemed to me to be right to look at it like that, and Irvine loved that idea. It’s such a massive story – it’s all Los Angeles back and forth to Edinburgh – and it’s difficult to do all that in an hour and a half! Especially if you want to keep the basis of that book pure. I think nowadays people like the event thing too – they like ‘six hours of this… bang.’ They can boxset it. They can binge it. So after a few chats we thought that’s the way forward.”

The first Trainspotting movie, released in 1996, was a generation-defining story of drug-addled Scottish youths and their misadventures. A long-speculated follow-up was released in 2017 and picked up two decades after the events of the first film, with the traumatized characters dealing with the ghosts of the past.

Here’s the official synopsis for The Blade Artist:

Jim Francis has finally found the perfect life – and is now unrecognisable, even to himself. A successful painter and sculptor, he lives quietly with his wife, Melanie, and their two young daughters, in an affluent beach town in California. Some say he’s a fake and a con man, while others see him as a genuine visionary. But Francis has a very dark past, with another identity and a very different set of values. When he crosses the Atlantic to his native Scotland, for the funeral of a murdered son he barely knew, his old Edinburgh community expects him to take bloody revenge. But as he confronts his previous life, all those friends and enemies – and, most alarmingly, his former self – Francis seems to have other ideas. When Melanie discovers something gruesome in California, which indicates that her husband’s violent past might also be his psychotic present, things start to go very bad, very quickly. The Blade Artist is an elegant, electrifying novel – ultra violent but curiously redemptive – and it marks the return of one of modern fiction’s most infamous, terrifying characters, the incendiary Francis Begbie from Trainspotting.