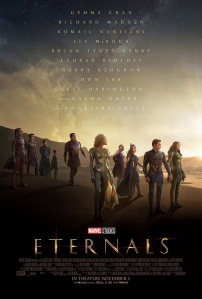 The highly-anticipated Marvel Studios outing Eternals won’t be shying away from talks about superhero mythology within the Marvel Cinematic Universe. One such reference, however, might come as a surprise to viewers. In a recent featurette, the powerful Eternal Ikaris (Richard Madden) is referred to as Superman by the son of teammate Phastos (Brian Tyree Henry). While speaking to Variety, director and Oscar winner Chloé Zhao talked about this peculiar reference, which has already been established in Marvel films.

Believe it or not, name-dropping DC’s iconic superhero was not a point of contention for Marvel Studios president Kevin Feige. “You write it on the page, show it to Kevin, if he doesn’t say anything, that’s a go,” Zhao revealed, “I don’t think there was a conversation. Not really, except, he goes, ‘Oh, that’s cool.’”

She also delved deeper into the mythological origins of the reference. “We’re playing on a genre that draws so much from mythology,” she explains, “and Superman, for example, was created in the comics and also by these brilliant filmmakers along the way. They’re modern reinterpretations of mythical characters that exist in different cultures.”

It is clear that Zhao is passionate about superheroes and their connection to mythology, whether the characters come from Marvel or DC. Despite Ikaris’s lack of a cape, the director thinks that there is a clear connection between Superman and the Eternal. “Ikaris is our interpretation of [one such mythical character]. It doesn’t mean we can’t pay tribute to the really iconic version that we’ve all grown to love and has influenced us.”

However, this type of reference isn’t exclusive to just Eternals. Back in 2018, Sony kickstarted their new Spider-Man Universe with Venom starring Tom Hardy as reporter Eddie Brock and his titular symbiote. When his ex-girlfriend Anne (Michelle Williams) finds out about his newfound abilities, she proposes that loud sound frequencies are Venom’s primary weakness, its kryptonite to be exact.

Despite being each other’s direct competition, it’s quite interesting that Marvel holds DC’s contributions to popular culture to such high regard. It’s no secret that the two comic giants have shared a mutual respect for each other through, as evidenced by 1996’s ambitious comic miniseries crossover DC vs. Marvel. However, having this friendly rivalry make its way into film, where the stakes for profitability and cultural relevance are far higher, makes it all the more endearing.

Zhao shares a similar sentiment. “Everything that’s referenced in this film, whether it’s in words or visually, is a tribute,” she explains. “It’s out of love and our admiration for these characters.”

You can watch the rest of the Superman-dropping featurette below. Eternals will finally release in theaters on November 5: