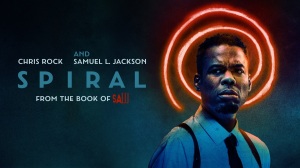 Spiral: From the Book of Saw was the first film in the franchise that did not feature Tobin Bell’s Jigsaw in any capacity outside of a photo cameo and that divided long time fans of the franchise. The main plot involved Chris Rock’s Detective Banks tracking down a cop-killing copycat killer that connected to his past. They only ever mentioned Jigsaw in passing and the film served as a back-to-basics story for the franchise, but one of the co-writers of that ninth installment may have just teased the famous killer’s involvement in the next film.

Co-writer Josh Stolberg, who has also penned scripts for the 2009 remake of Sorority Row and Piranha 3D, took to social media to post an update on the development of the film which you can view below. The photo includes the other Spiral co-writer Pete Goldfinger with franchise producers Mark Burg and Oren Koules “polishing up the script” for the next movie. However, what everyone will be talking about is the end tease of the post with Stolberg saying, “ What I can promise you is that this is gonna make John Kramer fans very happy”. With John Kramer being the real name of Jigsaw, the writers and producers are playing with horror fans’ heartstrings. This iconic villain has been technically dead since 2006s Saw 3, but because of the complex multilayered timelines of the sequels, Jigsaw returned in some way in every film after that besides Spiral.

Spiral’s flashback narrative involving cop corruption wrapped up at the end of that film and the cliffhanger left us with the copycat killer played by Max Minghella getting away with his crimes. Similar to the way Jigsaw did in the very first Saw film and, because of this, it remains to be seen how this trap-loving killer will tie into that story. Especially since, out of all the films, Spiral was the most stand-alone of the franchise.

Due to the pandemic Spiral only made $40 million on a $20 million budget, but maybe this villainous tease is just what the franchise needs to get back on top of the horror food chain.

There is still no release date for this untitled Saw 10 and it has not even been officially greenlit yet, but for all the latest Saw news stick with Collider.

Back with my horror family, polishing up the next @Saw script. I could tell you There will be 🩸, but you know that already. What I can promise you is that this is gonna make John Kramer fans very happy!!! pic.twitter.com/zrtQIrerJs