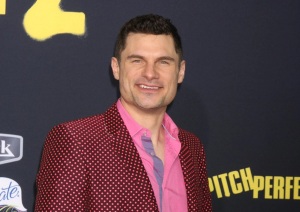 Both Devine‘s Bumper and Borg‘s Pieter were the leads of their own a capella groups. As became a staple of the franchise, both led their crews (the Tong Hangers and Das Sound Machine) in a riff-off, an event that will likely be present in some capacity in the show. The series also looks to be in good hands as Elizabeth Banks and Max Handelman are returning to executive produce the show. Banks had a brief role in all three films, in addition to directing the second.

No other cast members have yet been attached to the show, with Anna Kendrick, Rebel Wilson, Brittany Snow, and Skylar Astin some notable absences. Yet that could make sense as this Pitch Perfect spin-off is definitely on a smaller scale, and appears to be telling a story centered on Bumper. It doesn’t appear that a fourth film was every truly in the cards, as the box office for the third film was a notable disappointment making around 70% less than Pitch Perfect 2 in opening weekend debuts. The third film did need to compete against blockbusters like Jumanji: Welcome to the Jungle and Star Wars: The Last Jedi, though there really didn’t seem to be an audience clamoring for the Bellas.

Devine can currently be seen on HBO‘s The Righteous Gemstones, while Borg was last seen in James Gunn‘s DC film The Suicide Squad. There is currently no release date for this Bumper-centric Pitch Perfect spin-off, though a premiere later this year on Peacock is most likely.

Per Universal and Peacock, the synopsis for the Pitch Perfect spin-off is as follows:

“The show follows Devine’s vocal villain Bumper Allen, several years after viewers saw him in the films. Invited by his old friend Pieter Krämer (Borg), Bumper moves to Germany to revive his music career when one of his songs becomes big in Berlin. Pieter has transitioned from German a cappella star to discredited German music manager. He signs Bumper as his only client and brings him to Berlin to pursue his dreams.”