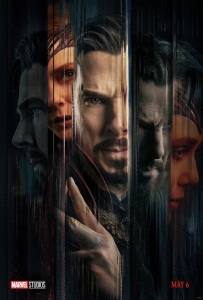 After Tobey Maguire‘s and Andrew Garfield‘s appearance in last year’s Spider-Man: No Way Home, fans have speculated about who could pop up in Marvel‘s next film Doctor Strange in the Multiverse of Madness (directed by Sam Raimi). In an interview with Empire, producer Richie Palmer talked about some of the rumored surprise appearances.

The latest trailer for the film featured a handcuffed Doctor Strange (Benedict Cumberbatch) appearing before a group of people. A voice is then heard saying, “We should tell him the truth,” which sounds like Patrick Stewart, who played Professor Charles Xavier in Fox‘s X-Men film series from 2000-2017. The camera then reveals a bald head, hinting that Xavier is the one speaking to Strange. “I’ll quote the first X-Men movie and say, ‘Are you sure you saw what you saw?'” says Palmer, referencing a line in the film spoken by Magneto (Ian McKellen). “There are infinite versions of these characters, and just because you may have heard something familiar doesn’t mean it’s someone you have seen before.” This wouldn’t be the first time the MCU has brought someone from the Fox-era X-Men film series to play a different character. Evan Peters, who played Quicksilver/Peter Maximoff in the X-Men film, appeared in the 2021 Disney+ limited series WandaVision. Although introduced in the series as Quicksilver — and Wanda’s brother who died in Avengers: Age of Ultron — he was later revealed to be an imposter named Ralph Bohner.

The scene in the trailer hinting at Stewart‘s return as Professor Xavier has also made some fans believe that the Marvel Cinematic Universe could be introducing the Illuminati in the film. The Illuminati is a group from the comic books that includes Strange and Xavier, as well as Iron Man and the Fantastic Four’s Mister Fantastic/Reed Richards. The Illuminati previously appeared in the 2010 animated film Planet Hulk (directed by Sam Liu).

The possibility of the group appearing has had some fans wondering if an alternate universe version of Iron Man/Tony Stark might appear in the film. “As you saw in Spider-Man: No Way Home, some rumors ended up being true, some did not,” said Palmer. “I would love to see Tony again, but some rumors are just rumors. I will say that I love the Illuminati. But if we ever introduce the Illuminati in the future, it might be more MCU-driven and have some more ties to our characters in the MCU, versus just replicating what’s in the comics.” Although the MCU‘s primary version of Iron Man (Robert Downey Jr.) was killed off at the end of 2019’s Avengers: Endgame (directed by Anthony and Joe Russo), alternate universe versions of the character have been introduced in the Disney+ animated series What If…?, voiced by Mick Wingert.

Doctor Strange in the Multiverse of Madness will be released on May 6, 2022.