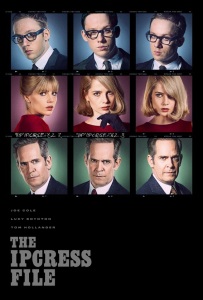 Get your decoders ready and be sure to watch your back, AMC+ has rolled out a trailer for their upcoming spy thriller series, The Ipcress File, and it’s going to keep you on your toes. Hitting the streaming platform on May 19, the six-parter will take viewers on a wild ride alongside one of Britain’s most notorious (fictional) spies, Harry Palmer. AMC+’s take on Len Deighton’s beloved novel will see Peaky Blinders alum Joe Cole starring as the wily and intelligent Palmer, a role that revered actor Michael Caine held in the book’s previous on-screen adaptation.

Taking audiences back to a 1960s London, the trailer reveals Palmer being busted out of jail under the terms that he must help the British government on one of their most dangerous missions yet — the capturing of a mysterious person. Nerdy and more awkward than another British spy we know and love, Palmer will need some help to complete his harrowing task. For this, he’ll turn to Jean Courtney (Lucy Boynton), a savvy and helpful undercover agent who will show Palmer the ropes. The rest of the trailer puts the team in dangerous circumstances amid explosions, shoot-outs, and captures. If you’re a fan of the spy-drama genre, this retelling of Palmer and his adventures should not be missed. Pride and Prejudice actor Tom Hollander also stars.

Emmy-winning director, James Watkins (Black Mirror, The Woman In Black) stood at the helm of the series, lending his eye to the action-packed twists and turns The Ipcress File will provide. BAFTA award-winner, John Hodge, who was behind the screenplays for fan-favorite films Trainspotting and T2 Trainspotting, adapted Deighton’s novel for AMC+.

As for the lore surrounding The Ipcress File, the top-selling book was first published in 1962 and quickly gained traction among readers, leading to its first on-screen adaptation in 1965, in which Caine starred. Released to packed theaters, the film would take home a BAFTA award for that year’s Best British Film and has remained an influential piece of spy-based work over the last 50+ years. Part romance, part action, with a lot of intrigue, the newest retelling of Deighton’s groundbreaking novel looks like it will live up to the hype that made the story of the mysterious Harry Palmer a hit in the first place.

You can see the trailer below and keep up with the adventures of the spies behind The Ipcress File as new episodes roll out weekly beginning on May 19, only on AMC+.